Salads in Myanmar aren't quite like salads I've ever eaten anywhere else.  For a start, the main ingredient of perhaps their most famous salad dish is pickled tea-leaves!  I had heard about this dish, known as laphet, and was determined to search it out.  However, it was nowhere to be found in Yangon - or perhaps it was on the menu but it was written in Burmese script?!


Anyway, the first we saw of it was when we reached Bagan, and stopped to grab a drink at a roadside stall.  Hanging from the side of the stall were these little sachets...  yes, labelled only in Burmese, but I felt sure that this was it.  We bought a packet and decided to sample it with our pre-dinner lager that night. 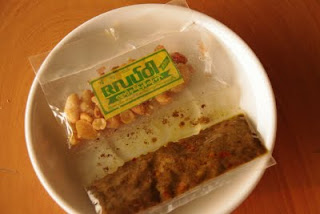 As you can see, it looked slightly sinister...  The tea-leaf paste was mixed with crispy fried peanuts, sesame seeds and broad beans. 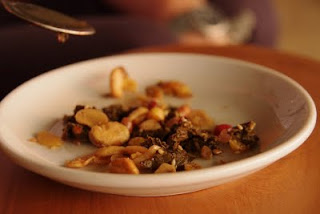 But if there was ever a case of something tasting a LOT better than it looks, this was it!

In fact, we went straight out to supper at a vegetarian restaurant we had found in Old Bagan (The Moon) and I ordered a large plate of the same salad (Rob had pumpkin curry). 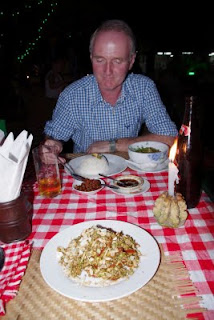 This salad was even better than the stuff in the packet.  It had lots of extra ingredients - I had a chat with the restaurant owner and took notes while he told me what was in it:  pickled tea-leaves (of course), peanuts, sesame seeds and pumpkin seeds (both toasted), fresh chillies, crispy fried garlic, raw garlic, fresh tomato and fresh lime juice.  It was the garlic that really elevated it to new heights I think - fried garlic has such a distinctive taste, and paired with the raw garlic (in vampire-scaring amounts) gave the salad a real lift.

I've been trying to research more detailed recipes for this salad, but they seem fairly few and far between.  However, I have noticed that in many restaurants the salad is served in its constituent parts and either assembled by the diner, or tossed together at the table (see video below).


I see from the video that dried shrimp can also be added, but I think I'd prefer it without; those shrimp can be very pungent.  We bought several more small sachets of the salad, but also a larger bag of the pickled tea, along with a bag of the crispy nuts and seeds, so we'll definitely be having a go at it now we're back at home.  Of course sourcing the pickled tea-leaves might be somewhat of an issue in the future, but I'm sure there are ways and means... and perhaps I might even try making some myself?

However, in the absence of a ready supply, the Myanmar salad can be created without the addition of tea.  We also ate it in several other versions, notably made with lemon. 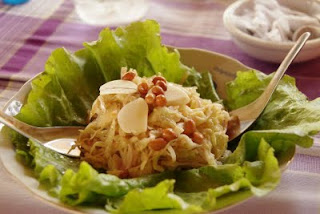 This was a base of shredded white cabbage, mixed with ground peanuts, peanut oil, toasted peanuts, fried and raw garlic, and large chunks of fresh lemon.  Wow, this was zingy - a perfect refreshing lunch on a hot day.  Another variation was made with a local leaf called Pennywort.  We saw this in a supermarket and didn't recognise it as anything we'd seen either in the UK or Brunei, but the salad was made with similar ingredients and had a delicious savoury flavour.

I've always been someone who would rarely think of having a salad as a main meal, but these salads in Myanmar went a long way towards changing my mind!
Posted by Norm at 12:52