When I tell people that I enjoy foraging for food, I am often asked if I have ever made Nettle Soup.  It seems to embody the very idea of free food from the countryside.  But the answer has always been no.  Last year I fully intended to make some, but left it too late - for the best results you need to gather the nettles when the leaves are young and tender - about now is great.

This year the unseasonably sunny weather kicked me into action, so Rob and I set off this afternoon, armed with gardening gloves, to forage for some nettles.

They're not exactly hard to find!  Once you start looking in any hedgerow or field boundary you soon find plenty - I think they're so common that I often don't even notice them.  We chose a patch that wasn't too close to any well-used footpaths (hoping to avoid nettles fertilised by dog-wee!) and got picking.

The gloves were, of course, invaluable.  Had I thought ahead I would have also worn boots but set off in sandals, only to find my ankle got stung.  But one sting from all those nettle-tops didn't seem too much of a sacrifice (although I had forgotten how much it hurts!)

When picking nettles, you need to pinch out the tops, so you end up collecting the 4 smallest leaves from each plant.  It's immensely satisfying, as foraging usually is, but this time with the added bonus of being able to feel that in some tiny way you're keeping the spread of these pesky plants in check! 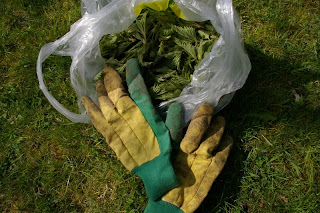 We soon managed to gather the requisite half-carrier-bag-full needed, and rinsed them well in cold water (wearing washing-up gloves this time!).  They're really quite pretty leaves when you look closely at them - but it's those fine hairs that cause the stings.  Luckily boiling water neutralises them within seconds. 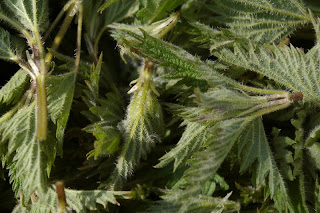 I found many recipes online, but ended up making up the soup using what I had, including a handful of the wild garlic leaves collected yesterday, making it a well-foraged soup!  This is what I did:

Chop one large onion and one large potato (unpeeled) and gently soften in a large pan (use olive oil or butter).

Add half a pan full of stock (I used chicken) and bring to the boil, simmering until the potatoes are tender.

Add the nettles (half a bag full) and a large handful of wild garlic (or saute a chopped clove of garlic with the onion and potato at the beginning of the process), stir, cover and bring back to the boil for 3 or 4 minutes.  The leaves will darken a little and wilt down, much as spinach does. 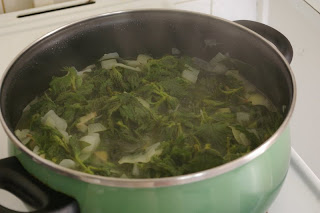 Blend the soup until smooth (I used a stick-blender), and stand back and admire the vibrant green colour!  Sample and season with salt and pepper as needed; I found that it needed quite a lot of both. 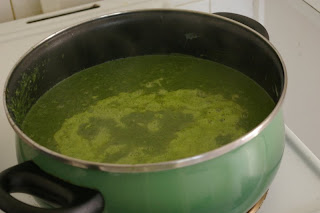 When I reheat it I will stir a little cream through each bowl just before serving, to make it a little more luxurious.  I have sampled some already of course...  the nettles don't have a strong flavour, it just tastes quite 'vegetabley' to me, but delicious all the same - and virtuously healthy too!

Whilst foraging, we were passed by a couple out on a walk who were intrigued by what we were doing.  I think foraging for food appears rather eccentric to those who don't do it..!  The woman said that she had once had Nettle Beer... could this be our next project?!
Posted by Norm at 18:03 4 comments:

For those of you who might be interested in sniffing out some wild garlic yourself, I have a few hints and tips.  I have found 3 patches of it in my local area.  All 3 are in deciduous woodland, and 2 of the 3 in places where bluebells are also found.

I have noticed that there seem to be 2 different varieties of wild garlic...   The one with long thin leaves that I blogged about recently: 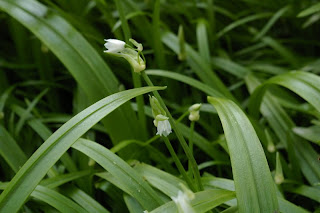 And one with much wider leaves, which I think is possibly the more common variety: 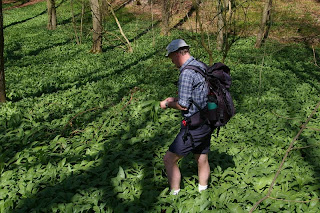 Here's Rob collecting from the vast patch of them that we stumbled across on a walk yesterday.  From my nibblings, I think that the wider-leaved garlic has a stronger flavour...  Rob was certainly complaining about my garlic-breath for hours after I ate a mere half a leaf yesterday!

Both varieties have small white flowers, and the leaves begin to turn yellow and die back soon after the flowers have blossomed.  There's quite a short window of opportunity for gathering the leaves to eat.

We filled our sandwich box with them, and I have made another batch of pesto, as well as using them as an ingredient in a soup.

Here is a wider-angle view of the patch, to give you an idea of the kind of woodland in which you need to search: 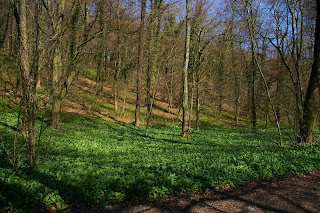 In my experience you sometimes smell the leaves before you see them.  I did notice a few plants growing individually in the woods, but mostly I think the plant seems to grow close together with many others, creating these dense areas of garlicky leaves.

Winter has been a lean period for foraging - but one that has seen us enjoying the fruits of our labours.  For months now we have been eating homemade jams, apple chutney, hedgerow jelly, spiced damson sauce and chili jelly, to name but a few.  It's been great, but I've been keen to get out and find more wild food.
Last week I struck lucky.  We were returning from a walk and within 5 minutes' of home I suddenly smelt the unmistakable scent of wild garlic.  I first used this last year, and realised that the season is all-too-brief - the leaves quickly turn yellow, so need to be grabbed when fresh and green.  I raced home to get a bag, then came straight back out to gather some leaves. 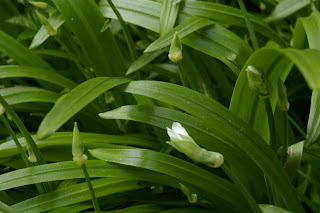 Last year I had eaten them as part of a salad, and also stirred them through cooked pasta along with some homemade walnut pesto, but I wanted to try and make them a bit more of a feature in their own right this time. 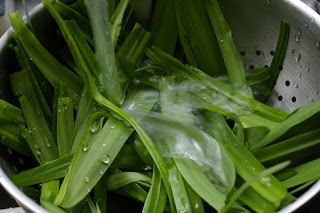 I decided to turn them into a pesto.  Loosely following a recipe that I found in one of Hugh Fearnley-Whittingstall's books, I blended the garlic leaves - 2 large handfuls - with about 50g of toasted pine-nuts and about the same amount of grated Parmesan.  I drizzled in EVOO to bring it all together, before seasoning with salt and pepper. 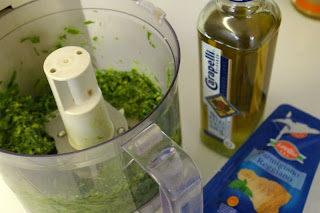 OK, it might look a little like alien-goo, but the garlicky smell wafting up from it was wonderful.  We ate it stirred through cooked pasta and topped with crispy bacon and shaved Parmesan.  Delicious. 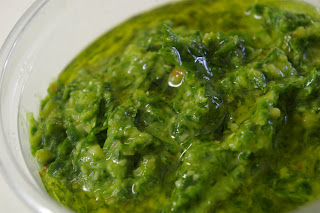 I'm currently away on holiday (in Shropshire - about which more in another post) but I'm really hoping that that patch of wild garlic is still there when we return.  I'd like to forage further!
Posted by Norm at 17:35 2 comments:

I didn't do as much baking as I had hoped for Easter.  This was largely due to the fact that the school term didn't end until Maundy Thursday, so rather than the usual week-either-side-of-Easter holiday, we have the 2 weeks after Easter.  I'm not complaining of course - it's lovely now to have so much time after the Easter weekend - but it has meant less cake.  Oh well.
I've never got round to making my own Hot Cross Buns, but we have enjoyed plenty of bought ones.  Halved, hot from the toaster and slathered in butter...  sometimes with Marmite too.  Although everyone who've ever seen me spread Marmite (or even Bovril) on a Hot Cross Bun thinks I'm some kind of madwoman.  But it's nice, trust me! 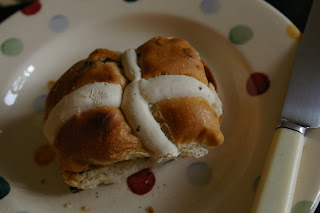 The one thing I did manage to bake was a Simnel Cake.  I don't use a 'proper' Simnel Cake recipe, but instead make Nigella's Marzipan Fruit Cake from the recipe in How to be a Domestic Goddess.  Instead of the traditional layer of marzipan in the middle of the cake, this recipe calls for a block of marzipan to be cubed, then frozen overnight before being stirred into the uncooked cake mix.  This means that there are nuggets of marzipan throughout the cake - as well as the layer, plus 'apostles' (just 11 - Judas doesn't get one), I put on the top. 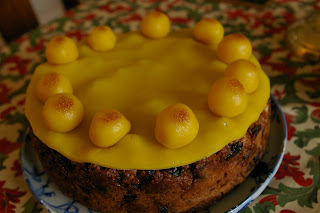 Looking at the finished cake I think I should have made the effort to make my own marzipan.   The pack I purchased, labelled 'Golden Marzipan' should perhaps have been renamed 'Scarily Vivid Yellow Marzipan'... although maybe that might not have made it a best-seller.   Our attempts to burnish the marzipan topping using our kitchen blow-torch nearly ended in disaster (Rob lost all the hairs on the back of one hand, and I consider myself lucky to still have my eyebrows...)  But, it's the taste that counts, no?  And this cake tastes good.

It's a very fruity cake, made with glace cherries, sultanas and, slightly unusually, dried pears.  These give the cake a wonderful fudgy graininess and help keep it moist, even when accidentally overcooked. 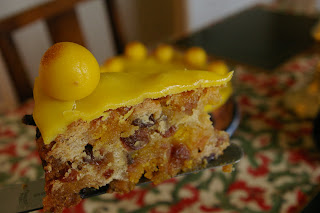 I think I left it in the oven for 10 minutes too long, but in my defence it was very hard to test its 'doneness' as inserting a skewer without hitting some gungy marzipan was impossible.  However, it was far from ruined as the marzipan and fruit kept it pleasantly squishy.

The recipe can be found here, on the Nibb'lous website.  I didn't change the recipe much, although I don't keep white rum in the house so ended up soaking the dried fruit in medium sherry, with a splash of rum flavouring and some extra orange-flower water (not, incidentally, an essential addition to the cake).