Rob's away, but this weekend I've had Bob to keep me company instead.  Yesterday was grey and rainy, but today was the greatest contrast; non-stop glorious sunshine.
Bob and I walked along the canal, then up onto Coombe Hill, where there were lots of other dogs and their owners to say hello to, and plenty of things for Bob to sniff! 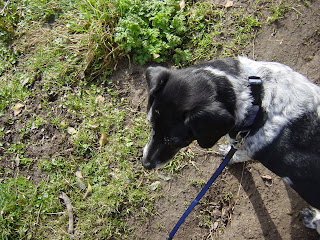 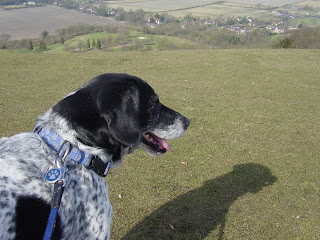 But the best bit of the day was coming home after our 3-hour walk and just enjoying the sunshine.  I pottered round in the garden while Bob chewed his tennis ball.  And then we both went and lay down in a patch of sunlight.  Bliss! 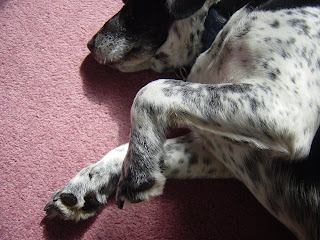 What's in Your Handbag?

I'm considering myself 'tagged' by both Sandy and Lisa who have recently revealed the contents of their handbags to us.  OK, so they call them their 'purses' but for us here in the UK a purse is what you keep your money in (what my trans-Atlantic friends would call a 'wallet'...  although for us in the UK a wallet is what men keep their money in.  Confused yet?). 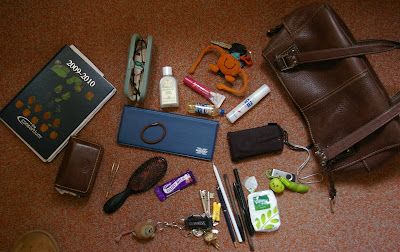 I was quite amazed at just how much stuff I lug around every day...  Here are the contents, in brief:

- My diary.  It's a school-issue one which runs from August to August, covering the whole school-year 2009-2010.  We all have identical ones so I always feel the need to customise mine in some way.  This year it's with stickers from The Very Hungry Caterpillar, bought in the Eric Carle Museum of Children's Art in Massachusetts.

- My glasses.  I pretty much only wear them for driving so perhaps should just keep them in the car.  However, I am beginning to need them rather more often so have decided they should live in my handbag instead.

- Keys (many...).  The car key is on the Mr Tickle keyring.  The house and school keys are on the monkey keyring.  I like having easy-to-locate large keyrings.  It saves too much rummaging.

- Purse.  Lovely leather purse from Roots in Canada.  It is quite stuffed full...  but not with cash, mainly receipts, which I'm never sure what to do with.

- Chequebook.   Not sure why I carry this, I use it so rarely nowadays.

- Flip Video Camera.  I've been using this a lot at school recently to film the children when they're doing Drama.  They love to watch themselves 'on TV' afterwards.

- Hairbrush.  Mason Pearson - stupidly expensive, but worth every penny.  This one has been detangling my hair for about 12 years now and is still going strong.

- Memory stick.  On great Japanese 'Mameshiba' keyrings that my brother Ben sent from Japan.  My class love them, especially the one that speaks Japanese when you press the button!  I often need the memory stick in school when the computer network fails me...

- Lip balm.  Never without it.  I have some very cool Vanilla Pepsi lipbalm sent to me by Sarah in Canada.  I also have some lipgloss - I never wear lipstick, so this is as glam as I get!

- Mini deodorant.  For a quick freshen-up after teaching PE!

- Hairband.  For windy days.  Or those weeks when headlice are rampant within the class...

- Moisturising Lotion.  For cold, dry-hands days.  It's Crabtree and Evelyn Jojoba Oil lotion, one of my favourite scents ever.

- Tweezers.  For those eyebrow emergencies!

- Chocolate!  I have forgotten this was here.  I think it was given to me by a child who was handing out birthday treats.  Always worth having about one's person I feel.

The bag itself is a Fossil bag that I bought on the QM2 in the Summer of 2008.  I think it's a pleasing shape, and just the right size.  Though it could do with some leather polish to smarten it up now after nearly 2 years of use.

So, consider yourself tagged too!  I'm obviously quite nosy as this fascinates me.
Posted by Norm at 16:59 3 comments:

We recently returned from a lovely holiday in the Peak District.  I've visited there a couple of times before and always felt the place compared unfavourably with the Lake District, the Yorkshire Dales, South Devon, all our usual holiday destinations - but this trip made me reconsider.  Perhaps it was that we were staying in a particularly pleasant village; perhaps it was the cosy cottage; perhaps it was the weather - that perfect mix of great days for walking and photography, plus a few damp and murky days where the only option was a couple of hours of fresh air and exercise followed by a slump on the sofa in front of the fire with a good book.  Whatever the reason, I found myself liking the Peak District a huge amount, and look forward to a return visit very soon. 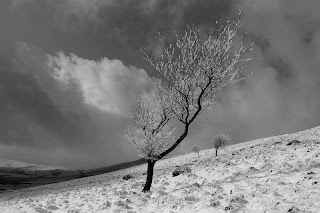 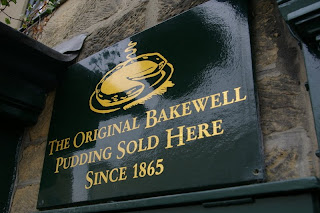 My favourite food-memory of the week was sampling the famous Bakewell Tart - more correctly referred to as a Bakewell Pudding.  These puddings are ubiquitous in the small town of Bakewell, with at least 3 shops claiming to be the 'original' Pudding shop, with their own unique recipes.  Spoilt for choice as we were, we plumped for the first shop that we came to, and I took a photo while Rob eyed-up the tarts..! 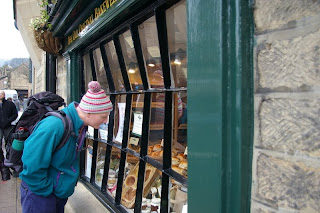 These Puddings are a far cry from the fondant and glace-cherry-topped tarts beloved by Mr Kipling.  The story goes that these puddings were accidentally invented by a careless cook who was left instructions to make a jam tart.  However, instead of stirring the eggs and almond paste mixture into the pastry, she spread it on top of the jam. The result was successful enough for it to become a popular dish, as it remains today. 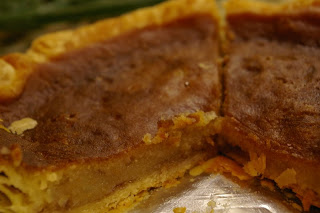 As you can see from this photo, the filling of these Bakewell Puddings is dense and eggy, not cakey and light as one might expect.  It was rich, and so delicious - but we soon discovered that eating too much (ie a third of a tart) in one sitting made you feel decidedly queasy!  The ingredients are simply egg, butter sugar and ground almonds, plus what the bakery claims is a 'secret ingredient'.  I couldn't work out what that ingredient was, but part of the secret to the tarts' success in my mind was the pastry which was simply divine.  It was a flaky puff pastry, but must have been made with lard judging from the film of white fat under the base of the pudding.  (That's a compliment by the way, however unappealing it might sound!) 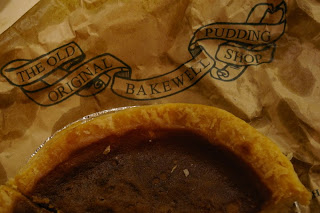 On our arrival home I determined to try my hand at a Bakewell Pudding.  I used a simple recipe from the classic Dairy Book of British Food, one of our go-to cookbooks for classic recipes.
As I suspected, this Pudding was more like a cakey Bakewell Tart, minus the icing of course.  Although the recipe called for 'red jam', I made my own by gently stewing a little forced rhubarb with the remnants of a bag of frozen mixed berries that I found lurking in the freezer.  The almondy topping rose, the flaked almonds burnished brown by the heat of the oven.  It may not have tasted quite as I wanted it to (I so want to recreate that dense eggy filling!) but it looked great.  And actually it did taste lovely too. 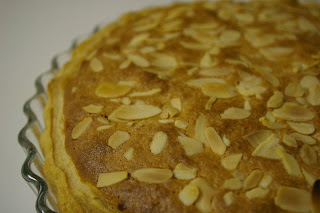 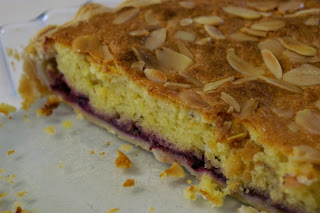 We ate it one night with custard, the following day cold with a cup of tea, and then the next night with creme fraiche and rhubarb compote. 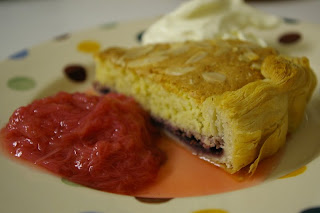