England and Canada share a language (although as I'm always telling the kids I teach, I'M not the one with the funny accent!) and we also share some aspects of our history and culture. However, it is the little differences between the two cultures that I find so fascinating - often things that I just hadn't thought about before coming here. My work as a teacher can often provide great insights into these differences, and nowhere is this more evident that in the way that the residents of both countries celebrate certain festivals...

I have already discussed Hallowe'en on this blog. It is a HUGE business here, and I happily threw myself into some aspects of it... well, the ones that involved food anyway! I even dressed up for the occasion. 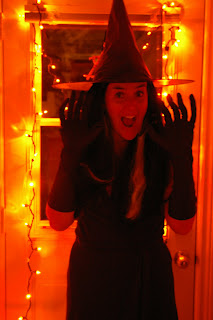 When considering whether to don a costume for the 31st October, I chose a witch as an obvious option. After all, what else would one dress up as at Hallowe'en? But when answering the door to the multitude of trick-or-treaters, I found myself grinning confusedly at children dressed up as everything from princesses to Spiderman. At school the following day I asked the class what costumes they had worn the previous night... answers ranged from Scooby Doo to Jack Sparrow. Baffling to a Brit, for whom Hallowe'en is firmly linked with witches and wizards, not superheroes, royalty or cartoon dogs!
Valentines Day has provided yet more occasion for wide-eyed amusement. In the UK it would be considered usual to send a Valentines card to your partner - boyfriend, girlfriend, husband, wife, etc. If one is single, then a Valentine may legitimately be sent - often anonymously - to someone who you 'fancy'. It would seem more than a little suggestive to send a Valentines card to someone who was simply a friend, and it would seem downright incestuous to send one to a family member (although perhaps small children, in their innocence, could get away with it?). Here in Canada it couldn't be more different. The juggernaut of commercialism has thundered out of control - cards are freely available for every possibly family member, one's teacher, friends, and quite probably postman, dentist and gynaecologist too. 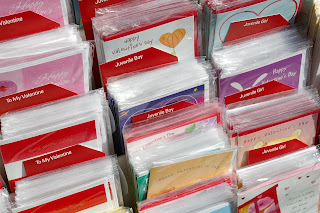 This year I had the pleasure of going to work in a Grade 1 and 2 class on the afternoon of February 14th. According to the teacher's plan, half of the afternoon was to be for a 'Valentines Party', where the children could go around the class, delivering Valentines via the cute mailboxes they had all made and displayed proudly on their desks. After 18 months here in Canada I was aware that it was de rigeur for children to give Valentines to their friends, but I wasn't quite prepared for the sheer amount of cards and gifts that were given! I think that every child in the class had brought in cards for every other child in the class - these were clearly bought in class-sized packs, adorned with every character you can imagine, from Spongebob Squarepants to Hannah Montana (I'm so 'down with the kids' - I even know who these people are!).
I was even presented with a hurriedly-written one by a very cute little chap called Nick: 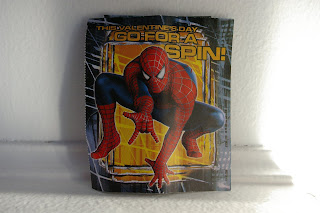 Forget hearts and flowers, good old Spidey is the perfect Valentines messenger! I even snaffled a spare card to take home for my very own loved one: 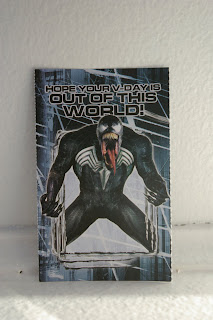 Who said romance is dead?!

Cards, it seems, were just not enough... many children also brought in gifts, most of which involved large amounts of sugar and lots of artificial colourings - guaranteed to create a sugar-rush of epic proportions in all 20 kids. I just let them get on with it!

I even received some cute Valentines candies of my own, presented to me by a fellow-teacher who must have spent hours creating a basketful of these little goodies. I thought this was hilarious! 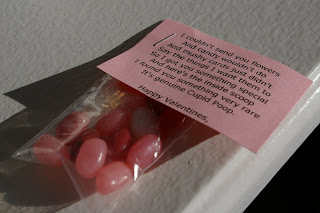 I'm very anxious to clarify myself here - although I find this whole North-American Valentines extravaganza quite amusing (it's just so different to the British way of celebrating the day) it was a hugely enjoyable day for the children. They had been doing heart-themed work for weeks, they all wore red or pink to school on the day, and they all went home with bulging bags of cards and candy, and blood-sugar spikes that were off the charts. It seemed a rather charming way to celebrate friendships, and a great excuse for what was basically a break from 'proper work' at school. And why not? Valentines Day would barely be mentioned in your average UK school. As a concession, I have on occasion allowed my class to make Valentines cards, but always with the sneaking feeling that it was somehow a little inappropriate to encourage young children into 'romantic love' - there's plenty of time ahead for that! However, here this was not an issue, it was simply a fun way in which to tell your mates that you like them, and Spiderman and I think that's OK!

Rob and I usually get on really well, agreeing with eachother on most subjects, and generally living fairly harmoniously together. However, on occasion he will make a statement that really irks me... A few weeks ago I was talking about what one might cook if a vegetarian friend was coming to dinner, and Rob casually said "You can't make a 'special' meal without meat".
Now, I'm an eager meat-eater. I adore steak, will happily eat meat as part of every meal, and think that the English 'roast dinner' is one of the most sublime meals of all time, but this comment really stung me. OF COURSE you can have a 'special' meal that doesn't include meat! At this point I was well into my third glass of wine, so I rashly threw down a challenge to myself - I would cook vegetarian food for an entire week. Hah! So there!
In the cold sober light of day, I began to panic. As a teenager I gave up meat for Lent for a couple of years, and remember enjoying the food I cooked for myself then. However, that was many years ago, and I only had vague memories of what I had actually cooked. We do regularly eat one meat-free meal - last Summer I bought vast amounts of beautiful tomatoes from a local grower, and spent hours chopping and roasting them. Consequently we still have a freezer full of small bags of roasted tomato sauce, which we both adore. A regular speedy supper is spaghetti with some of this fantastic tomato sauce, and a scattering of parmesan cheese. But that was about all I had to go on!
I began scouring my shelf of cookbooks and soon began to feel a little more inspiration. I then posted a question on the topic on the cookery forum to which I belong... and what a fabulous response! I suddenly had hundreds of ideas, and started the week feeling as if I could cook vegetarian food for a month with no problem at all!
I started well - a fabulous Jamie Oliver recipe for Aubergine Lasagne, which I had found in a recent edition of Easy Living magazine. It contained thyme, and a small chili, which gave it a lovely gentle heat. A real winner. 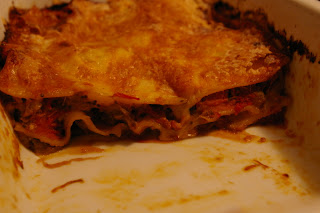 I also made a wonderful butternet squash, red pepper and cream cheese soup, having been inspired by a day of cooking soup with my friend Sarah who supplies a local village shop with her homemade goods. I had never thought of adding cream cheese to soup, but it gave it a very velvety texture. It's always great to find new uses for the fabulous local squash that are so plentiful here. The co-ordinating Le Creuset pan was a happy accident! 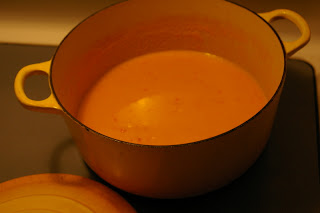 One of our favourite Friday night meals is an all-American classic, the burger. Good burgers, nice buns and a huge selection of toppings (including the ubiquitous orange slices of processed cheese!) make it a really decadent end-of-week feast. I thought I would attempt a vegetarian take on this meaty classic, so announced to Rob that we would be having... mushroom burgers instead. How his little face fell! I roasted the huge portobello mushrooms with garlic and butter, and put them into some lovely onion rolls I had bought. I thought it was delicious - at least as good as the meaty alternative, especially when served with lots of grainy mustard, spicy fries and the New Orleans Coleslaw from Nigella Express. I could tell Rob wasn't quite so enthusiastic. 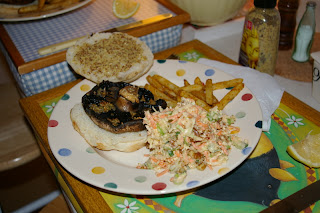 And this is where my vegetarian project hit a small glitch... I came downstairs on Saturday morning to find Rob in the midst of preparing a distinctly meat-filled Carbonade of Beef. Rebellion within the ranks! Of course, he made a vast amount of beef casserole (and very delicious is was too) so we ended up eating it for days.

As soon as the casserole was finished, I tried again, this time making a recipe given to me by a fellow cooking-forum member: Squash-stuffed Cannelloni. This consisted of making a mashed squash stuffing, filling cannelloni (which I soon discovered was a very tedious task!), then pouring over a delicious oniony, creamy sauce, and baking the whole dish. This, I have to say, was a huge success. Both Rob and I loved it, and I even ended up making the dish again a few days later, adding some red pepper to the sauce this time. 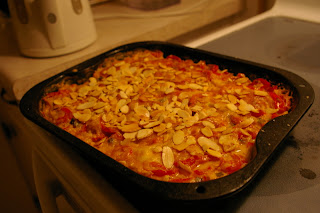 And so, after a very brief foray into vegetarianism, we are back to eating meat most evenings. However, it did serve the very useful purpose of reminding me how many fabulous meat-free dishes there are, and how easy many of them are to prepare. I am now finding myself cooking at least 1 vegetarian meal per week from my now-large and inspired list of ideas... and I'm getting no complaints!