I adore Bread and Butter Pudding, it's such a comforting dish, especially when the weather is cold.  It's a dish that's simple to make, with many possible variations.  Delia Smith's chocolate version is a particular favourite of mine.  When we were staying at my parents' over Christmas my mum had come up with yet another version that is equally delicious, and even simpler than the original - using Brioche rolls.  Because Brioche is so buttery you don't need to faff about buttering the bread, so it's very quick and easy to throw together.

The Brioche rolls I buy come from Lidl.  Each 350g pack contains 10 rolls which will make a large pudding suitable for 6-8 people.  If I'm just making it for the 2 of us I'll just use 5 rolls and we get extra-large portions!  I'll give the recipe using 10 rolls, but of course it's easily halved: 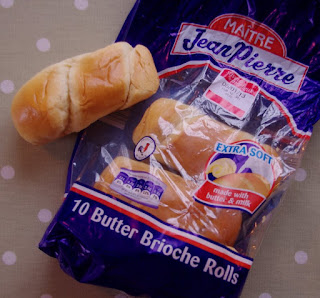 350g pack of Brioche rolls
4 eggs
50g caster sugar
700ml milk
100ml double cream
1 tsp vanilla extract (or simply use vanilla sugar instead of caster)
100g raisins or sultanas, or choose another fruit - I like to use fresh blueberries
Optional - sprinkling of cinnamon or nutmeg

Cut or tear the rolls into 4 and arrange in a large ovenproof dish.  Scatter the fruit over the top. 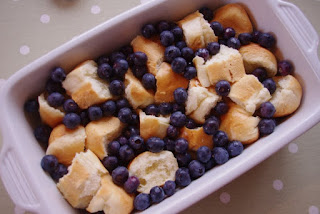 In a separate bowl whisk the eggs, then stir in the milk, cream, sugar and vanilla.  Pour this mixture over the brioche and leave to soak in for at least an hour. 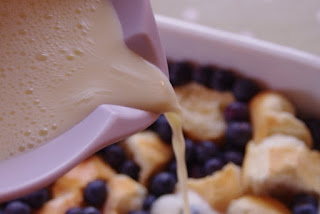 Bake the pudding at 180 degrees C (350 degrees F) for 40-45 minutes until the top is beginning to turn golden brown and the egg-custard is softly set.  The rolls puff up quite dramatically while cooking but sink a little when cooling.

You can serve this straight from the oven, but I prefer it warm so like to leave it half an hour or so before eating.  Serve with cream.