A recipe from my friend Barbara.  She produced this cake when I last popped round and I devoured a slice warm from the pan, topped with full fat creme fraiche!  She very kindly sent me home with another chunk for Rob and I to share for supper which we ate with Greek yoghurt.

It's more a pudding than a cake, with a batter-like liquid holding the apples together.  Totally moreish! 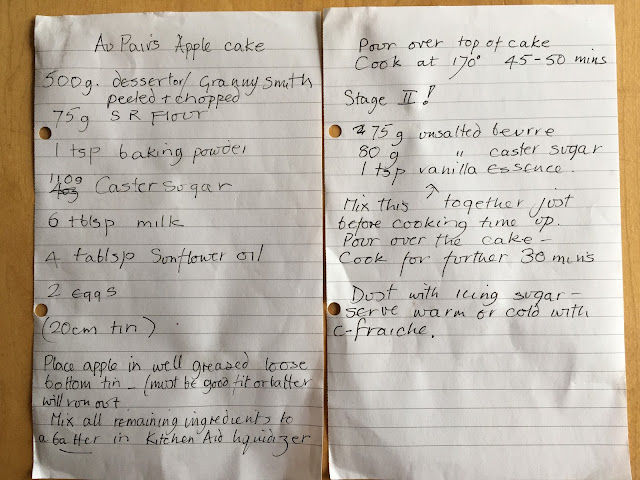 Despite the long title, this is a really simple and delicious vegetarian supper dish.  It's full of punchy flavours and I've also found it pretty adaptable.  It's another great recipe from Waitrose, this time from their weekly free newspaper.  About once a year I make a jar of preserved lemons, so it's nice to find another way to use them, aside from the predictable tagine.


1. Rinse the couscous in a sieve under cold running water and tip into a medium saucepan. Cover with fresh water, add a pinch of salt and bring to the boil. Simmer for 7-8 minutes or until tender. Drain, refresh under cold water and leave to drain well. Place into
a large mixing bowl.

2. Add the cumin seeds (if using) to a dry pan and toast over a medium heat for 1 minute, until browned and aromatic. Remove and grind to a powder using a pestle and mortar then tip into the couscous bowl with the preserved lemon, garlic, pistachios, dill, parsley, all but 2 tsp olive oil, the lemon juice and pomegranate molasses to the bowl. Mix to combine.

3. Warm a frying pan over a medium heat until smoking hot. Coat the salad onions with the remaining oil and cook along with the whole chilli for 4-5 minutes until charred. Cut the salad onions into thirds and the chilli in half, discarding the seeds. Chop the chilli and add to the couscous.

4. Cut the halloumi into thick slices, brush with oil and cook on the hot griddle for 2-3 minutes until golden on both sides. Cut into bitesize pieces and place on top of the couscous. Season and add more lemon juice if needed. Spoon into a serving dish and scatter with pomegranate seeds and sumac just before serving.

An old family favourite - but we have no idea where it came from!  The name suggests it might be slightly Indian, but this isn't the case.  We suspect it came from a magazine, probably in the 1960s or 70s.

Anyway, wherever it's from it's a lovely tasty meal, quick to make but also smart enough to serve guests.

Coat chicken breasts in seasoned cornflour then shallow-fry in oil and butter in a cast-iron (Le Creuset-style) pan until browned.

In a jug mix the stock cube, hot water, dijon mustard and Worcester Sauce.  Add to the chicken, and simmer for an hour.

Before serving stir in the cream.

We usually serve this with rice and a steamed green veg.  The rice is useful for soaking up all that delicious sauce!
Posted by Norm at 10:29 No comments:

Brown Rice with Chorizo and Egg

I don't tend to buy many food magazines, but somehow I seem to accumulate piles of cut out recipes.  We pick up the free Waitrose magazine every month which always seems to have lots of lovely things to cook, and this, coupled with recipes I snip out of newspapers, or photograph from friends' cookbooks means I feel like I'm fighting a losing battle to keep them organised.

So I've decided to use this blog to keep a record of the ones we've cooked, enjoyed, and would like to make again.  This should mean I don't need to keep so many bits of paper around the kitchen...  we will see how that goes!  Some blog posts might have photos to accompany them, but many won't.

Anyway, here is a lovely 'midweek' recipe that I found in the Waitrose magazine last month.  It's really versatile because you can add in any ingredients that need using up (at this time of year I like/need to throw in a chopped courgette to pretty much anything that I make!).

Brown Rice with Chorizo and Egg

125g chorizo (about half a Lidl chorizo), chopped
8 (or more) cherry tomatoes, halved
1 tsp hot smoked paprika, plus extra to serve
2 garlic cloves, crushed
250g cooked brown rice (the recipe says to use a packet of ready cooked, I cook my own)
100g green beans, chopped (or any other green veg - courgette especially)
2 tbsp chopped dill (I subbed this with basil)
2 eggs (recipe says soft-boiled and halved, I found it quicker/easier to fry them)
2 spring onions, trimmed and sliced

In a large frying pan, cook the chorizo for 5 minutes, or until golden brown - it releases plenty of oil so you don't need to add any.

Add the cherry tomatoes and cook for a further 2 minutes.

Stir in the paprika and garlic and cook for another minute or so, until fragrant.

Tip in the rice and beans, season with a little salt and add a splash of water.  Cover with a lid, turn to the lowest heat and cook for 5 minutes until the beans are tender.

Fold in the dill (or other herb), top with the egg (softboiled or fried - poached would work too), and scatter over the spring onions with extra paprika if wanted.

My husband likes this served with extra chilli sauce.