I've become a real breadmaking fan since moving to Brunei.  The climate in our non-airconditioned kitchen, whilst a pain in the arse for cooking most things as you need to go and have a shower after about 5 minutes in there, is perfect for rising yeasted doughs.  I am in the routine of making a couple of malted granary loaves every fortnight which we slice and freeze so I can just pull a slice out of the freezer on a school-day in my 5:45am stupor, and 3 minutes later have toast.

I've recently begun some tentative experimentation with sweeter breads, most often the recipe that you find on the side of the packet of the Waitrose Organic Malted Grain bread flour that we buy from SupaSave here in Brunei.  It's a nice loaf with only a hint of sweetness from the added honey, and I often adapt it slightly by using whole hazelnuts instead of the specified walnuts, and also throwing in a handful of raisins.  Eaten toasted, slathered with butter and a sprinkle of cinnamon sugar, it even makes getting up at stupid o'clock almost acceptable.

But this morning I decided to push the boat out still further and have a go at some Chocolate bread.  I had found the recipe on the back of a sachet of dried yeast from Sainsbury's, and had hung onto the empty packet intending to make it.  As the expiry date on the packet is July 2011, I think I must have held onto it for well over a year before I actually got round to making it, such is the speed at which my culinary mind works at times...

But as I said, this morning I tackled it.  I was up and about well before Rob (thanks to him 'forgetting' it was a public holiday today so setting his alarm clock last night... thanks love!) - he had managed to go back to sleep but I was suddenly and irritatingly wide awake and ready to bake.

Sift the flour and cocoa powder into a large bowl and rub in the butter.
Add the yeast, sugar, salt, chocolate pieces, orange peel and mix well.
Add the milk and water (I also added some orange oil I found lurking in the fridge) and mix to a dough.
Turn the dough out onto a lightly floured board and knead for 10 minutes (or 5 minutes in a mixer with a dough-hook).
Shape the dough as required (I plonked mine into a greased non-stick loaf tin) and place onto a well-greased baking tray.
Cover loosely with greased clingfilm (or don't bother - I didn't) and allow to double in size.  This may take 30-60 minutes, depending on the warmth of your kitchen.
Carefully uncover and bake in a preheated oven - 200C fan, 220C non-fan, gas mark 7 - for 25-30 minutes.
Remove from oven and allow to cool on a wire rack.

I'm pleased with it.  It tastes lovely, especially with some salted butter (I love the salty/sweet combination).  Mine has quite a loose crumb as I lazily didn't knead it for the allotted 10 minutes.  My board kept sliding around on the work-surface (note to self, put damp teatowel underneath it next time to stop it moving so much) and the chunks of chocolate also made it tricky to knead well.  So I gave up and left it to rise.  It's now sliced and in the freezer... but I'm a little worried it'll be a pain to toast as the chunks of chocolate will melt in the toaster.  Still, it'll taste great I'm sure, even if it is a little messy! 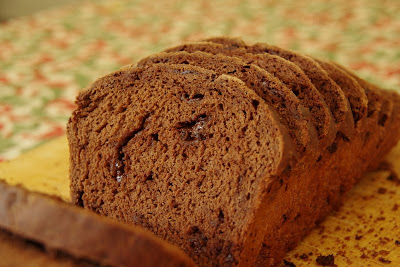 Wedding Bells at the Empire Hotel

Last year I went to my first Bruneian wedding, and last month I went to another!  They really are a fascinating experience for those of us used to the traditional British wedding.  Never mind it all being over in one day, the Bruneians make it last for days with lots of special food and outfits.

The beautiful bride at this wedding was the sister of the lovely Maya, aka Foodiva, my Bruneian blogger friend.  Maya has written a little about the wedding in this recent post, but I thought I'd add a few of my own photos too.

The party was held in a large hall, part of the fabulous Empire Hotel.  We went along with another couple that we knew (who are friends of Maya's brother) as we knew that men and women usually sit separately at these events.  Good to have someone to chat with as well as share some enjoyable people-watching at what is always a colourful occasion!

When all the guests were seated the happy couple arrived - here they are entering the Hall (a rather blurry photo in all the excitement). 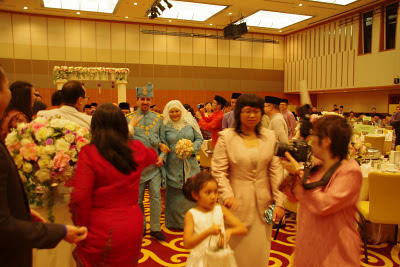 As you can see, their outfits were simply stunning - I just love that vibrant turquoise blue.  In Western weddings the bride often outshines the groom, but I love that in Bruneian weddings the groom gets the chance to dress up in fabulous clothes too so they both look amazing! 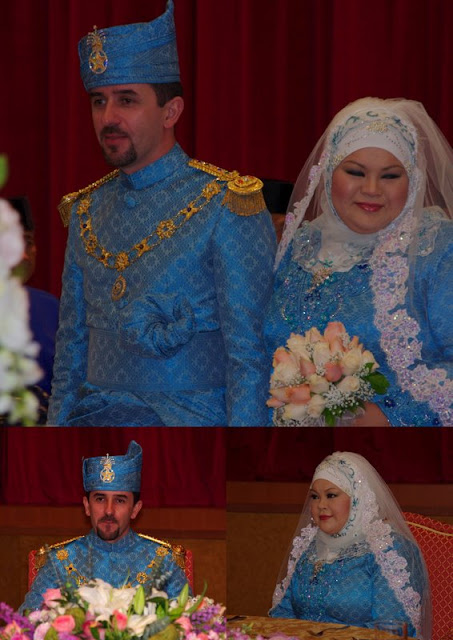 A delicious meal followed, at which I was too busy talking and eating to take photos 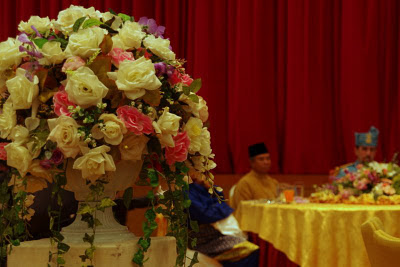 I'm not sure how much the poor bride and groom got to eat as they seemed to be constantly having to smile for photos.  A down-side of being the centre of attention for the day I suppose! 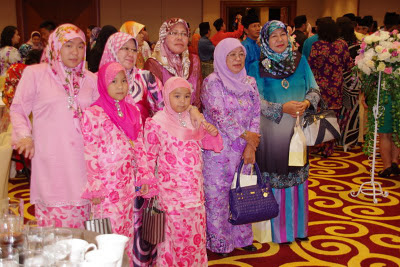 I love seeing the Bruneians dressed up in their vibrant baju kurongs (the ladies' outfits), tudongs (ladies' head-dresses) and baju melayus (the men's outfits).  I can no longer fit into my lovely green baju kurong so I wore a more Western outfit for the occasion.  I think this made me a rather more noticeable guest, as several Bruneians asked if they could take my photo alongside them and their families!

Here's me with Maya: 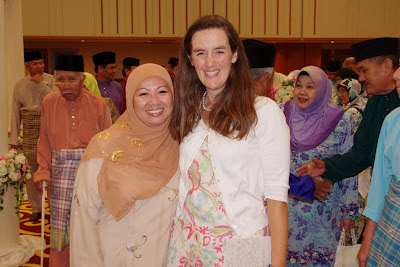 All best wishes for a long and happy marriage to Fida and Ardian - and special kudos for having the cutest wedding favours I've ever seen! 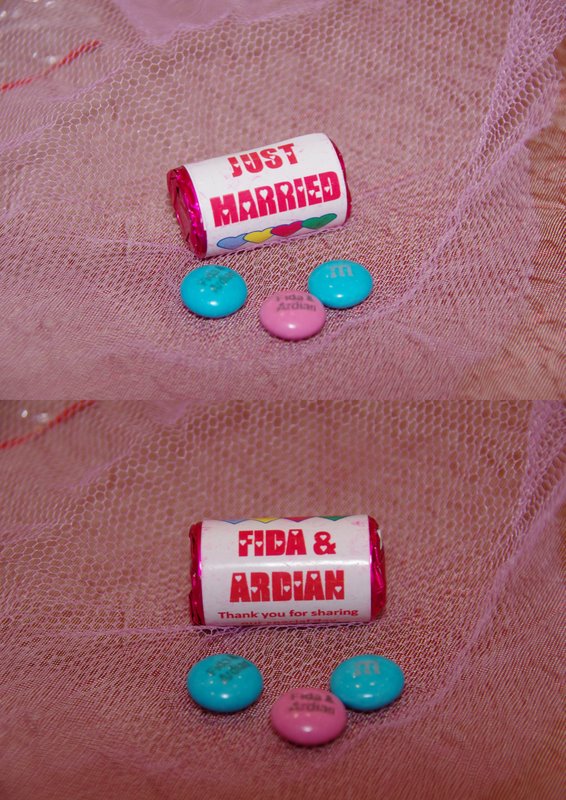