Remember those walnuts we spotted last week? Well, we decided that we had better do something with them, and fast. Apparently the squirrels are likely to get to them before we do if we wait for them to ripen, and this blog-post by David Lebovitz convinced me that the time was right to get picking.

I must admit that I was a little wary of making a whole litre of Nocino - not to mention the fact that there was no way I could find a large enough jar to do so (as it was I had to decant my preserved lemons out of the jar I used), so I ended up halving the recipe that David gives. But then of course we had, in our zeal for foraging, collected far too many walnuts... 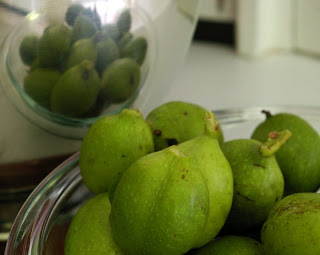 A quick flick through a recent charity-shop-bargain recipe book - 'The National Trust Book of the Country Kitchen Store Cupboard' by Sara Paston-Williams - soon presented me with an ideal solution... Pickled Green Walnuts (recipe below). This is a lengthy process, but here are some of the more tender walnuts, pricked with a darning needle (note to self, wear gloves. These are worse than the cherries!) and floating in their first bath of brine. (Three days later the brine is black, and the nuts are beginning to blacken too... they look very sinister!) 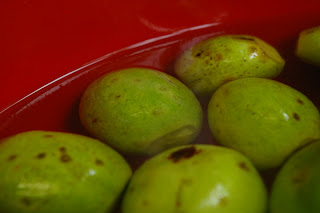 But back to the Nocino... 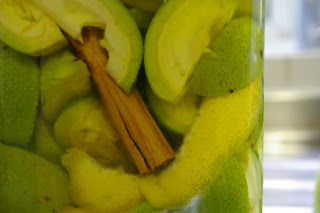 It was a simple process, involving some careful chopping - some of the nut shells were beginning to form within the green casings - and then packing them into the jar along with the cinnamon stick, lemon peel, cloves, vanilla pod, sugar, and of course the 500ml of vodka. 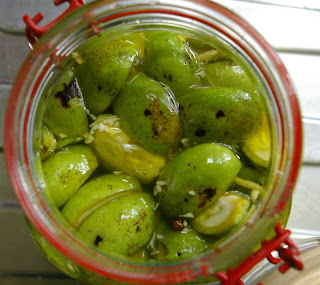 And now all we have to do is wait. Already it's beginning to darken, but I think we will have to wait for Summer 2010 before it's ready to drink. I'm pretty excited by it. 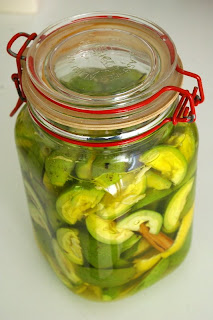 The walnuts need to be soft enough to pass a knitting needle or skewer through them - I'd suggest picking in late June or early July. We used the softer ones for this pickle, and the ones that were beginning to harden (the shell starts to form at the end opposite the stalk) for the liqueur. Remember to wear rubber gloves unless you want to end up with the hands of a 60-a-day smoker...

Prick walnuts lightly with a darning needle to allow them to be permeated by the pickle.

Make a strong brine mixing 1pt of water with 2oz of the salt to gether in a bowl. Add the walnuts to the brine and leave to stand for 3-4 days.

Drain, and mix up another brine solution using the remaining water and salt. Put the walnuts into this and leave for a further week.

Drain well, rinse and dry them, and spread them out on a tray or plate. Leave them in a sunny place for a couple of days or until the walnuts are completely black.

Pack into clean jars and cover with hot pickling vinegar.

Seal well when cold and store in a cool, dry place for 6-8 weeks before using.
Posted by Norm at 09:16 3 comments:

From Ivinghoe Beacon the next hill along is topped by Whipsnade Zoo. I love the lion carved into the chalk hillside, and I know from my visit to the zoo that there are hundreds of wallabies roaming wild on said hillside, a sight which I always find quite amusing in the middle of the English countryside. 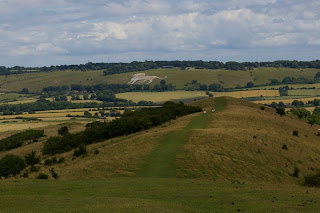 But more wildlife was to be found in this rolling chalk downland. Not perhaps as exciting as wallabies or lions, but just as beautiful in its own small way. 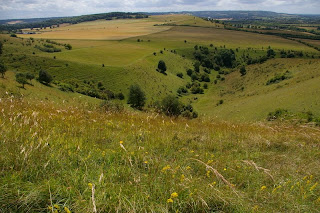 These are 6-Spot Burnet moths, and we walked through a field in which there must have been thousands upon thousands of them. Their wings are iridescent green with bright scarlet spots - 6 presumably... or maybe they were named by someone who had issues with their numeracy skills? 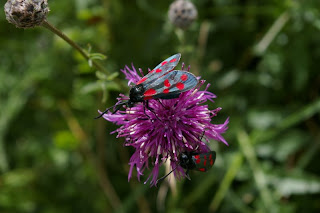 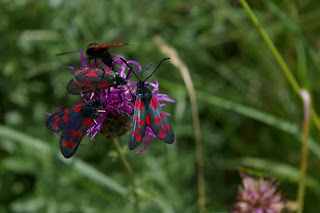 Some flowers were just covered in them. They seemed keen on these purple thistles. 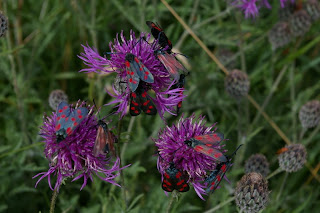 But we also saw lots on these Birdsfoot Trefoils. I think they look especially beautiful against the bright yellow flowers. 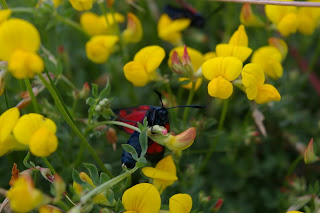 On closer inspection the long grasses were covered with the empty chrysalis shells. I think that in some master-stroke of Mother Nature they must have all emerged within a day or so of eachother. 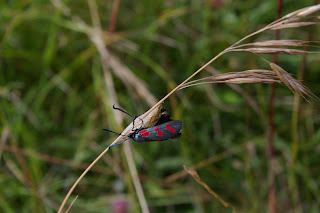 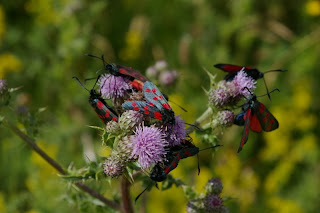 Some unexpected hedgerow treats from the last few days...

Wild raspberries, masses of plants growing near Ivinghoe Beacon, the fruit tiny but bursting with sweetness. We didn't bother to take these home, just picked them and popped them straight into our mouths. I suppose we should have washed them, but any stray insects were just considered extra protein. 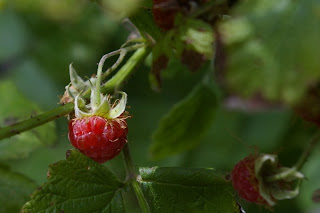 Growing very locally - spotted by Rob on his way home from work this afternoon - some kind of plum! We have seen a few of these trees growing in the hedgerows recently. Confusingly they have plum-coloured leaves, so it's hard to spot the fruit. However there's plenty to be found on close inspection. 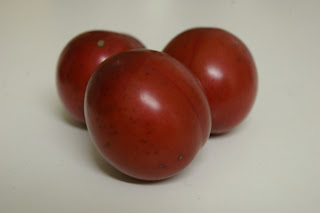 We managed to collect a whole punnet during 10 minutes of picking earlier today. The fruit is firm but juicy, sweet but with a lip-puckering tartness too. I'm not sure I will cook with these, I think we'll just eat them as they are. I mean, there's only so much jam a girl can make...

If anyone knows what these are, then I would be very interested to know. And obviously do let me know if they're poisonous... preferably before we eat them all! 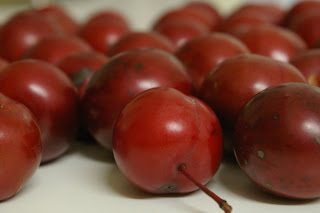 And some tantalising glimpses of what is to be foraged next season: 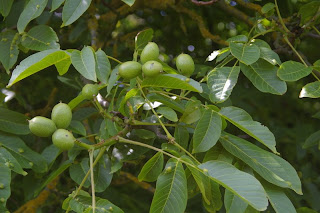 Not to mention the apples, crab-apples, sloes, haws, rosehips and elderberries that I have my eye on, all growing within 5 minutes' walk of the house. I'd never wish away the Summer, but I can't help but look forward to the Autumn just a little bit!
Posted by Norm at 22:03 1 comment:

Anyone walking into my kitchen yesterday would have been forgiven for screaming and running for the door, calling the police as they did so. 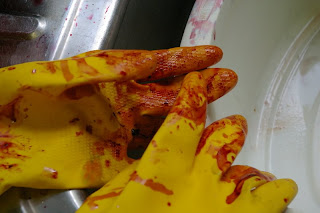 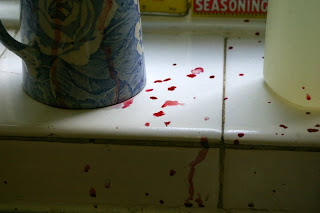 It certainly looked as though I had been committing bloody murder... (that'll teach Rob for leaving the toilet seat up again!) 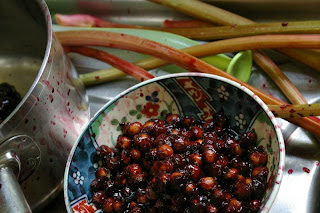 But the reason for the dramatic red spattering was in fact these beautiful cherries. As I mentioned in a previous post, I have discovered several wild cherry trees in the locality. But it turns out that there are rich pickings even closer than this - we even have a cherry tree in our GARDEN! And so apparently do many of our neighbours. Now, our tree is producing quite small, scarlet cherries. They have a nice sharp flavour, but still sweet enough to eat unadorned. However, they are a real pain to pit as they simply pop straight through the hole in the pitter! But... over the road, in Abbi's garden, is a tree which is producing these wonderful dark red, large, juicy cherries. So yesterday saw me once again balancing precariously on a garden chair with a punnet in one hand, and cherry juice dripping down my arm. I hasten to add that I had asked her permission to pick them, and as she wasn't intending to pick them she was very happy that I should use them. 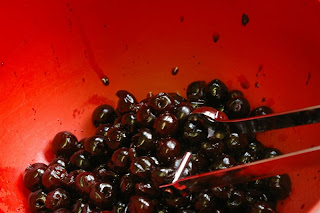 Cherry-pitting has to be one of the most tedious kitchen jobs there is. As well as being extremely messy, it's also slow and boring. And it makes your hand ache. What I really need is one of these nifty gadgets, as demonstrated on Amy Karol's lovely blog... Still, making do with the far less amusing but still pretty effective cherry-pitter from the local hardware shop, I battled through the freshly picked kilogram of cherries.

And you know what? It was worth every tedious minute. The cherry season is so short, it's worth making the most of every opportunity to use them, especially when they are available for free!

I had decided that I wanted to bake something with them, so went for the now famous Plum Torte recipe from the New York Times, but substituting half of the flour for ground almonds and leaving out the cinnamon. Instead of plums I tumbled several handfuls of pitted cherries, along with a generous scattering of sliced almonds. I had intended to use crushed amaretti biscuits to make a crispy topping as seen on this divine looking Cherry Amaretto Cake baked by the always-inspirational Mannix... but I couldn't seem to find the amaretti I thought were stashed in the cupboard. That will have to wait until next time. 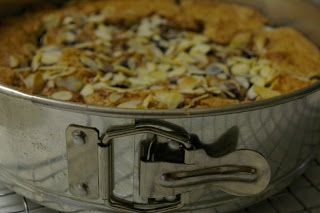 I was however very pleased with the resulting cake. Like it's Plum cousin, this is perfect eaten warmed as a dessert, but I wouldn't refuse a cold slice to accompany my afternoon cup of tea. In fact, I didn't refuse one, and utterly delicious it was too. 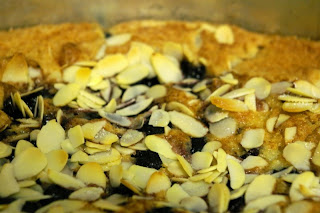 Having recently got the cupcake bug, I was keen to try some kind of cherry cupcake too. I had tried - with great success - filling cupcakes using the cone method... last time I used stewed rhubarb, but this time it was cherries, made into a light compote with just a touch of sugar. I strained the juice before filling the cupcakes so that the cakes didn't become too soggy. 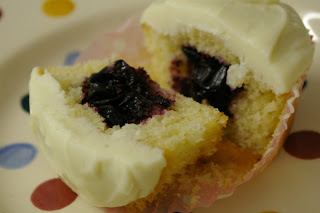 I 'invented' the topping - beating together cream cheese and icing sugar, and then stirring in 100g of melted white chocolate. This meant that the icing hardened slightly on cooling, and didn't slide off the cake. 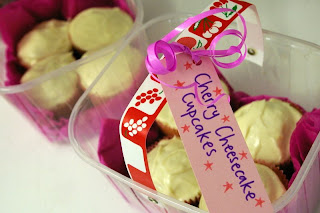 I thought it was only fair to thank the neighbours from whom I had picked the cherries, so packaged up a couple of cute punnets of cupcakes for them... All I can say is that my neighbours are lucky I delivered them before I tasted one of these. They're so gorgeous I would have struggled to give them away had I eaten one first!
Posted by Norm at 17:49 5 comments: