Somehow this is even funnier because I'm in the process of writing reports... 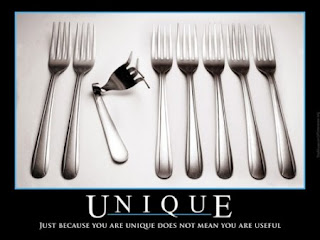 I have so many talented friends that I seem to spend much of my life saying things like "Wow!" and "I wish I'd thought of that". I had one such moment a couple of months ago when Dani, founder of the excellent Cottage Cooks website, announced on our forum that she had been designing and making her own cupcake wrappers. She's even set up a website dedicated to them: www.cupcakewrappers.co.uk, complete with 'Cupcake Wrappers Blog' to keep you informed of new developments on the Cupcake Wrapper scene.

It's no secret that I love baking cakes, but I must admit that I'm not great at decorating them... I have many sprinkles and glittery bits for cake decorating, but I've never really mastered the art of icing (it's on my 'to do' list!). However, these cupcake wrappers do away with the need for all that - of course you can still decorate them if time, skill and occasion allows, but just slip the naked cupcake into one of these and voila! It looks pretty perfect with no effort on your part at all.

I can't tell you how delighted I was to receive some of these fabulous wrappers as part of an Easter gift from Dani. They arrived in a bag, flat-packed, prompting plenty of "what are they?!" confusion from those unfamiliar with this genius concept. 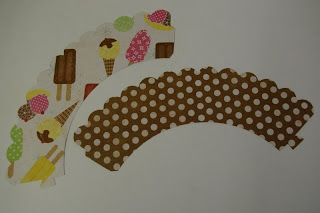 Yesterday I was struck by the cupcake-making urge and had one of those days where lots of things came together very nicely... I had half a tin of condensed milk in the fridge which needed using up, and I was determined to find a great chocolate cake recipe after a couple of recent chocolate-cake-related disappointments. I found Nigella's 'Birthday Cake' recipe in her book How to Eat and discovered that it required the exact amount of condensed milk that I needed. It was clearly meant to be. I also had 3 pears that were past their best, and as I love the combination of chocolate and pear I peeled and chopped them and added them to the cake mix.

They turned out beautifully. The mix made 15 generously-sized cupcakes. You might even call them muffins - I've never quite worked out the difference.

When the cakes were cool I made up the cupcake wrappers - the work of a moment, inserting the tab into the slot provided - and slipped the chocolately beauties inside. 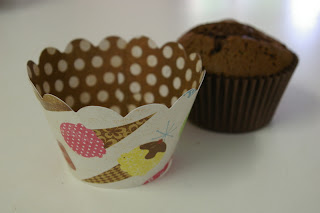 As you can see, the wrappers are reversible so you can choose which look you prefer - or wrap half a batch each way. 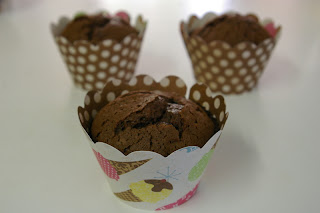 I think I'm most drawn towards the elegance of the brown polka-dots with the chocolate cakes... but the ice-creams and lollies design is very cute and summery, and such pretty colours! 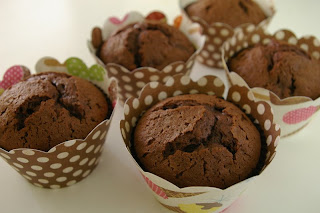 These wrappers would be a perfect way to make any special occasion even more special - do take a look at the Cupcake Wrappers website yourself and have a browse through the many designs there.
Posted by Norm at 17:30 2 comments:

There is a famous line in the 1953 film The Cruel Sea where Lieutenant Bennett learns that it's sausages for dinner and exclaims "Snorkers! Good-oh!"

Rob and I are both big fans of Snorkers, Bangers, whatever you call them. Sausages, mashed potato and baked beans are probably one of Rob's favourite meals. I enjoy them too, but I do sometimes have a problem with them... one hint of gristle, one minute unidentifiable bit of chewiness and that's it for me. I can't eat another mouthful. I'm not naive enough to think that your average snorker is made of 'nice' meat. I know they probably contain all kind of 'bits' of animal that I'd rather not think about. But I really don't want to be confronted with potential evidence of this, wondering whether I'm chewing on a piece of ear, trotter, or something much worse...

My solution is now to make my own sausages! When in America last year I purchased a meat grinding and sausage stuffing attachment for my KitchenAid mixer. I also ordered a sausage recipe book and some sausage casings, and was ready to go.

My first attempts last November were, erm, messy. It was a bit like being a participant on The Generation Game, except that there was to be no conveyor-belt of prizes to reward my efforts... just a clogged-up meat grinder, burst casings, and lots of cleaning up to be done. The resulting snorkers were OK, we ate them all, but I knew I could do better.

So yesterday we tried again. 'We' being the key. Yes, sausage-fans, don't try this alone. 4 hands are much much better than 2 when it comes to stuffing sausage casings! I chopped and ground the meat myself, and mixed up the filling (simply mince, breadcrumbs, water and seasoning), but when it comes to getting the mixture inside those collagen casings Rob became an essential part of the process, a job he took very seriously, as you can see. 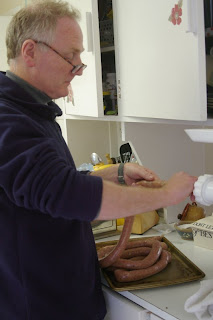 See the concentration on his face. 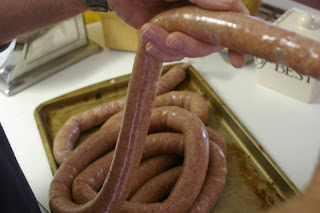 You can see a few air bubbles there, but that's OK. You need some space in the casings for when you twist them into individual sausages. 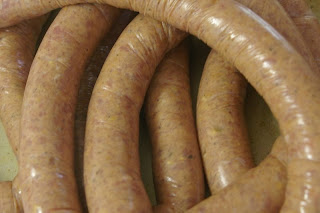 4lb of sausages ready to be twisted. I had to have a nice cup of tea and a sit down before I attempted the next step. I think it was like post-traumatic-stress after my last attempt... 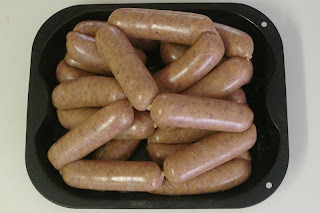 Success! No traumas this time. 4lb of snorkers completed. They are 'resting' in the fridge right now (which softens the casings), but I will bag them up in the freezer for this Summer's barbecues, keeping a few aside to accompany the mash and beans tonight.

I stuck with the 'basic' sausage recipe in the book, but the possibilities for variation are endless. Different meats, different seasonings, different liquid - next time I will try something a bit different.

We fried up a little of the mixture last night to taste, and it's great. I don't know why I was so surprised that they taste like, well, like 'real' sausages. And of course they are 'real' - I know exactly what's in them, much less fat than your average sausage and certainly nothing unpleasant or 'mechanically separated' (mmm, how tempting that sounds in a list of ingredients!). Snorkers to eat with pride!
Posted by Norm at 11:12 4 comments:

It's rhubarb season again! I missed out on buying the first of the luminously pink forced rhubarb this year, but now the greener chunkier stalks are everywhere. I bought some last week, but then discovered that a rhubarb-hating colleague at school had a garden full of it... so now I have a plentiful - and free - supply. 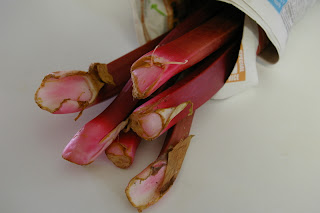 Ever since my recent trip to London, and the excitements of the Laduree shop, I have been itching to try making macarons again. I had a vision of making delicately pale pink beauties, filled with raspberry, or perhaps strawberry jam... but the arrival of my first bunch of rhubarb (and a typically heavy hand with the food colouring) meant that my plans soon changed. Those pale pink macarons will have to wait for the Summer.

I used half of my first batch of rhubarb to make a couple of jars of rhubarb and ginger jam, possibly my favourite of all jams, but something I had only ever bought from the local WI market. Sorry ladies of the Womens' Institute, but I think from now on I'll be making my own! Why does no one tell you that making jam is so easy? Clearly it's a WI conspiracy...

I did tint my macaron batter pink, but on seeing the finished jam decided that a hint of yellow colouring was needed. In my usual lazy fashion I couldn't be bothered to use a teaspoon, just thought I'd tip the bottle and add a mere couple of drops..... and in it gushed. Bright orange macarons! In for a penny... I (more carefully) added some orange oil, reasoning that orange and rhubarb were a perfect partnership. These macarons, once cooked, were delicious, with a taste reminiscent of a childhood sweet. Sherberty, like Refreshers. Gooooooood! 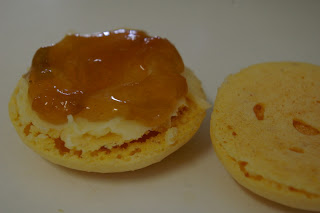 The addition of some lightly gingered buttercream, and a dollop of the rhubarb and ginger jam elevated them to Laduree level (well, nearly) et voila, les macarons parfaits! 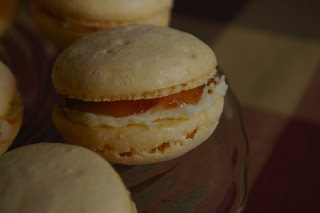 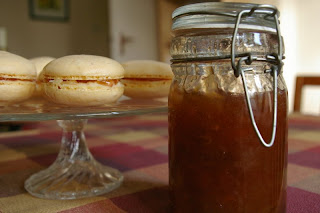 The recipe can be found here, in my previous macaron post. My first batch had coloured slightly so the only change that I made to the recipe was to reduce the oven temperature to 120C and increase the cooking time to 15 minutes. These macarons didn't brown at all, and had the bonus of an ever so slightly chewy texture.

These were very popular in the school staffroom too! I am pondering new flavours for my next macaron making session... I'm sure it won't be long before I make them again.