I'm off on holiday.  Alone.  Not particularly out of choice, but because it's my half-term holiday and Rob couldn't get time off this week.

I've been surprised by the fact that many people have said I'm 'brave' for doing this - but people holiday on their own all the time, don't they?  I don't think it's too big a deal...

I'm going to Chiang Mai in Northern Thailand.  It's a city I've been to before (my brother lived there for a few years and I went to visit him there in 2005), so I know it's a lovely place.  I'll be there for 5 days, and my guesthouse has free wifi, so 'virtual contact' with home should be easy (how ever did we manage before Skype and Facebook?!)

I'm hoping to spend a day doing a Thai cookery course, and am looking forward to browsing the markets and doing lots of shopping.  I'm also taking plenty of things to read so am planning to spend time sipping watermelon juice (or cold beer...) in cafes, immersed in a good book.

But I'll be honest, despite my excitement I am a little nervous.  I have 4 flights and 3 airports to negotiate on my own, and I arrive back in Brunei next Friday a mere hour and a half before a dinner we're attending, so I'm worried about delays.

Hopefully I'll have plenty to blog about on my return, but in the meantime - wish me luck!
Posted by Norm at 05:06 5 comments:

Pendlenton Industries in in production!

I've long had a little ambition, to see some of my photos printed onto greetings cards.  This had been on my mind for a while now, and earlier this year I made some enquiries to see whether this little ambition might perhaps become a reality...

What seems like months ago now, I posted an album of 42 photos onto facebook and asked my friends to comment on the pictures that they thought would look good on cards.  The response was amazing, with a flattering amount of people taking the time to look through them and 'like' or comment on them.  I found it a fascinating process, to see which images were most popular (incidentally, not always the ones I had thought!)

Since then I've selected images and had many many visits to a printer here in Brunei.  Much discussion ensued about the style of the cards, whether they should be matt or glossy, what should go on the reverse, etc, etc, and finally - when I was beginning to think it might never happen, a couple of weeks ago I saw the proofs: 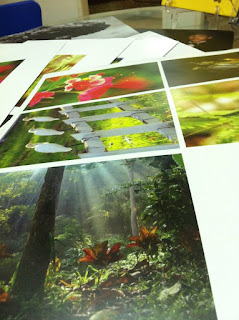 They looked great; I was so pleased.

Since then I have sourced envelopes, and plastic sleeves in which to protect them.   And today I collected my cards from the printer...  450 cards in total - 50 cards each of 9 different designs.  This is what the dining room table looks like tonight; a production line fuelled by large mugs of tea (soon to be moving on to mojitos I feel!). 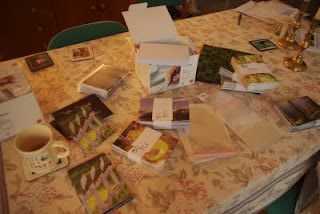 So now I am pleased to announce that tomorrow I will be putting my cards on sale.  Just at my school first of course, closely followed by the LS Office on Base, but I hope to be able to persuade a local craft gallery to take some too.

I'm not going to make my millions but the satisfaction of undertaking this project should, I hope, make it all worthwhile.  Exciting stuff! 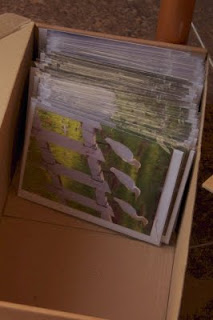 Having given my new blog-friend Ben a glowing review recently, I thought I should put my money where my mouth is and give one of his cakes a try.  And what better occasion to do so than Rob's birthday last week.

Looking through Ben's list of cakes, one immediately leapt out at me - the Ferrero Rocher Cake.  Rob is a big fan of Ferrero Rocher, and they're one of the few chocolates we can buy here that are the same as the ones you buy in the UK (all the bars of Cadbury's chocolate you buy here for example are either made in Malaysia or Australia, and are most definitely not up to UK standards!).

A quick Facebook message to Ben was all it took to place the order, and we arranged a rendezvous in a local supermarket carpark to exchange money-for-cake on the day itself.  It was great to meet Ben in person after chatting on our blogs and Facebook; good to put a face to the name of this talented local baker. 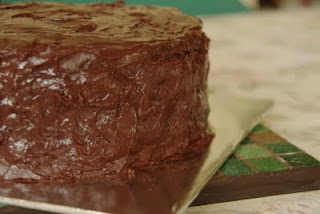 I could hardly wait to try this cake so rushed home with it to wait for Rob...  annoyingly (for him even more than me!) he was about an hour late home as he had got stuck in a meeting, so we didn't have time to try the cake before heading out for his birthday supper.  Luckily we refused offers of dessert in the restaurant so we could have birthday cake instead.  And wow, I'm glad we did!  This was better than any dessert we could have bought while eating out, and definitely more pudding than cake. 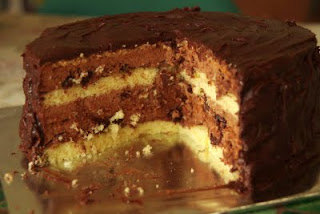 The cake was made from layers of sponge, brushed with vanilla syrup and sandwiched together with a chocolate mousse.  The mousse was studded with chunks of crushed Ferrero Rocher, giving it a lovely nutty crunch.  The whole thing was smothered in a rich chocolate hazelnut ganache...  rather like Nutella (and that is of course a good thing, not a criticism!)

I e.mailed Ben to ask how he had made this amazing creation, and this was his reply:  I used a regular oil-based sponge cake so it stays nice and soft even when chilled though you can use a chiffon cake too. For the chocolate mousse, I used an egg-yolk based mousse as I found it to be richer than the egg white one. The other layers are hazelnut dacquoise which is basically a meringue where ground nuts are folded in and then piped in a spiral to form a flat disk, it is hard and crunchy upon baking but softens wonderfully upon chilling.

This is the kind of cake I dream of making, but I'm self-aware enough to know that it's just something I couldn't do.  Not couldn't perhaps, but just wouldn't manage to do without inordinate amounts of stress and quite probably bad language.  Thankfully there are people like Ben in this world who make complex layered cakes such as this as a form of stress-relief, and for that I'm definitely willing to pay!  This cake was $50, but provided us with 12 good-sized portions - and this cake was rich enough that you didn't need any more than a 'good-sized portion' to feel thoroughly satisfied.

Incidentally - and shhh, don't tell Rob (thank heavens he neglects to read this blog, eh?!) - I also purchased a single-portioned Salted Caramel Tart from Ben.  He had sent out a message to some of his Facebook friends saying that he was baking them, and would we be interested in buying one?  Would I ever?!  I adore salted caramel.  I picked this up on the same day as the cake, although Ben had made them a few days earlier.  I was expecting the pastry to have softened somewhat over those few days, but it hadn't suffered in the least.  It was still as crisp as ever. 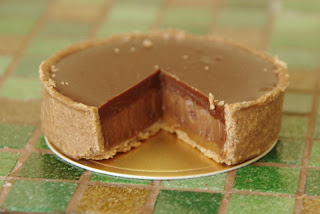 The filling was layers of deliciousness, involving salted caramel and chocolatey yumminess (can you tell I forgot to ask Ben for details of this one?) and Oh. My. Word. it was incredible.  I snuck it into school to eat for my mid-morning snack...  and made it until I shooed my class upstairs to the ICT room at 7.30am before sneaking a bite...  which then of course turned into several more bites until, oops, it had all gone.  I think that having a friend like Ben might be dangerous to my waistline!