Pushing myself out of my comfort zone

As you may have gathered, I love cooking, particularly baking cakes. Nigella Lawson's 'How to Be a Domestic Goddess' must be my most-used cookbook, by far. However, there has until recently been one distinctly unused, un-spattered, chapter in this book... the section on 'Yeast Cookery'. Something about using yeast has always scared me a bit - all that frothing and injunctions to have things at exactly the right temperature - all my previous attempts to do so had always been pretty disasterous. This had begun to prey on my mind, and hearing tales of my fellow forummers and their wonderful bread-baking only made me more determined to get it cracked.
Never one to start with the easy option, I leapt straight into my personal baking mission with the zeal of a lunatic... 'Danish Pastries!' More specifically, Nigella's Cheese Danish recipe. The Cheese Pastry is a rare and wonderful thing, made with a sweetened ricotta cheese filling, and is always my pastry of choice when I happen upon somewhere that sells them. This took me two attempts to get right, adapting the recipe for the filling somewhat, but the final product was pretty perfect. I was beginning to realise that the art of cooking with yeast lies in the relaxation of the cook - in the past I would watch the clock in a panicky fashion when the dough was meant to be rising, but I have now come to the conclusion that extra rising time is often needed. Perhaps it's the cool temperature in our house, but I am beginning to realise that nothing will come to much harm if left to rise for much longer than the recipe specifies. 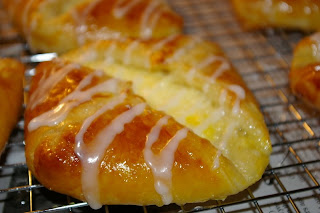 Anyway, back to those pastries - they made the perfect weekend breakfast. And doesn't breakfast always taste better when eaten in one's pyjamas? 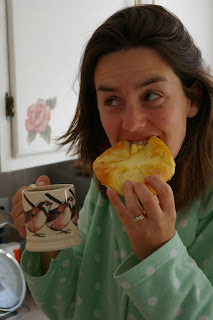 Buoyed up by the success of the Danish Pastries, I chose something a little easier for my next project - a homemade pizza base. Again this is Nigella's recipe, and it couldn't be simpler. 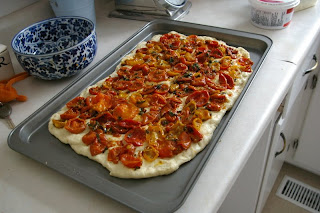 I've made two of these in recent weeks. The first one was for a friend's birthday, and I got so carried away with my celebratory glass of vodka and tonic that I omitted to take a photo. The picture here is of my second, smaller, pizza in the process of being topped with roasted tomatoes. I later added asparagus, proscuitto and grated cheese (a mixture of mozarella and cheddar) to make a very satisfying supper - streets ahead of the supermarket-bought frozen pizza that we usually eat.
I had a slight ulterior motive for making pizza dough actually... We have always been fans of the beautiful crispy aniseed biscuits that are so readily available in southern Spain - Tortas de Aciete. Delicately flavoured with aniseed and sesame, crunchy yet flaky, and covered with a layer of crisp caramelised sugar, these really are one of my perfect snacks. Here is a 'real' one, purchased at huge expense from a delicatessan in the USA on a recent holiday: 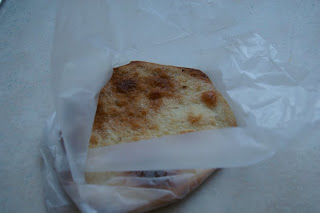 I made enquiries about making these myself and one of my friends, Melanie, kindly typed out a recipe that she had from a Penelope Casas book. I also found a fabulous blog, Wild Yeast, on which the author had written about making Tortas de Aciete, making the method slightly simpler. With the specified 'leftover pizza dough' I set about making them myself. 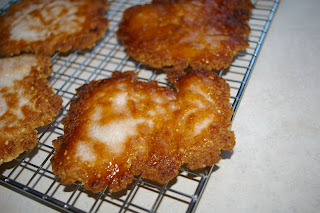 I'll happily concede that they don't exactly look beautiful... the final grilling to caramelise the sugar also had the unwanted effect of burning the edges, but they did taste very authentic. I'm sure I'll make a slightly better job of them next time!
And finally, my piece de resistance of yeast cookery... a real loaf of bread!! I've always been slightly resistant to making my own bread. After all, you can buy excellent bread in the supermarket, and I've always thought that home-made bread has a tendency to be quite heavy. Great for toast perhaps, but a little leaden for sandwiches. However, after many rave reviews on the cookery forum, I simply had to give this one a try... the No-Knead Loaf. Now I like kneading dough, I find it therapeutic, but I'd happily relinquish this pleasure to produce a loaf this sublime. Check out this link to see a video of the bread being made. It's what really inspired me to have a try. Plus, we have a Le Creuset 'Dutch Oven' (why does that make me snigger?!) identical to the one that she is using! For those of us who are easily confused by ridiculous measurements such as 5/8 of a cup of water, I used instead the measurements given by my friend Mara - 450g bread flour and about 350ml of water (add as necessary).
After a looooong leisurely rising of about 18 hours altogether I plonked the dough unceremoniously into the pre-heated pan and threw it into the oven. After half an hour it looked absolutely incredible - beautifully browned and made that wonderful 'hollow' sound when tapped. Perfectly done. 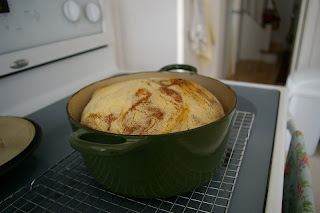 I'm sure this bread would have been divine as a 'plain' loaf, but I added 2 tbsp of chopped rosemary to the dough as I was making it to eat with a lemony chicken dish and thought that the flavours would compliment eachother. I was right. However, it was the fabulous texture of this bread that really sold it to me - a crackly crust concealing a moist and chewy, yet light and airy bread inside. Hard to describe really, but just make it and see. 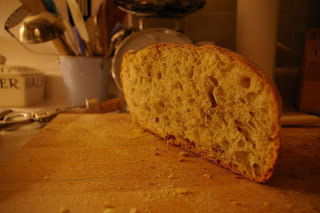 This was all that was left last night after 4 of us had eaten supper and Rob had made a sandwich for his lunch the next day. Just enough for a crisp, herbal-scented slice of toast for my breakfast this morning.