To be honest, if I'd seen a recipe entitled 'Wholemeal Honey Cake', I probably wouldn't have tried it. Why is it that the word 'wholemeal' sounds so... well... worthy? One thing that a cake should never be is dull, and I might have suspected that this one would be, except that I tasted it a while back, as made by my sister-in-law Anne, and it's amazing. The fact that it's made with wholemeal flour just adds to its amazingness as you can pretty much convince yourself that it's a healthfood. If you try to forget the fact that it contains 350g of butter that is...

Honey has featured high on my list of favourite foods recently, since practically the entire month of January has been spent with an ill person in our household. First I got 'the cold from hell' (resulting in a lost voice, among other symptoms, to the delight of my class), and then just as I was pulling out of the slough of sickness, Rob dived right in. Bummer. He has the 'pathetic' look perfected, as you can see. 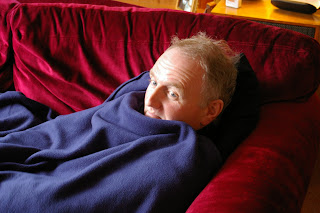 Still, this provided ample opportunity to serve him cups of tea in our new (but clearly produced 3 years ago) Emma Bridgewater mug... 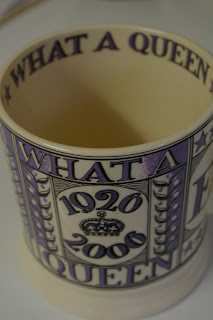 Where was I? Right, honey... Honey was recommended to me as a throat-soothing antiseptic, so both Rob and I have been eating honey on toast. I'm not quite sure why we didn't go down the hot-toddy route, but I seem to recall that the cold gave one that 'morning after' feeling all day, so the addition of alcohol somehow didn't seem appealing.

However, this cake ticked all the boxes as far as comfort food is concerned, looking - as well as tasting - utterly divine. The honey is not added to the cake batter, but drizzled liberally over the top while the cake is still hot. It permeates the top layer of the sponge making it deliciously moist, but also sits gleaming atop the flaked almonds. 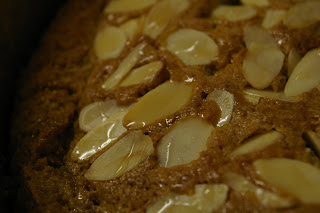 The recipe comes courtesy of Anne, photocopied from the Guardian Weekend magazine, part of an article written by one of my favourite foodies Hugh Fearnley-Whittingstall. Hugh says that this recipe was devised by his Head Chef at River Cottage, Gill Mellor, and suggests serving it warm as a dessert with lashings of cream, or cold with a cup of tea or coffee. We went for it warm from the pan, with frothing mugs of hot chocolate. 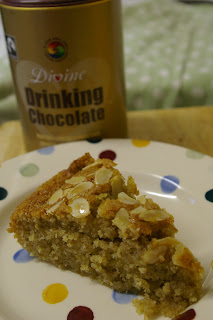 And a dollop of creme fraiche! 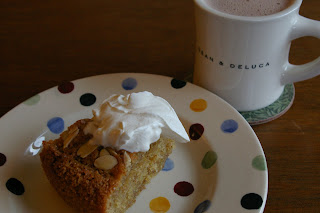 We found that this was a cake best eaten slightly warmed - just 10 seconds in the microwave is enough to make it even more meltingly tender-crumbed - but I wouldn't push it away if it were cold. It makes a large cake, and one that lasts for several days without suffering. We have been eating a slice a day all week.

I was on the verge of typing out the recipe when I did a quick search and found it here, along with the complete article - full of marvellous honey-facts - and many more honeyish recipes. I'm very tempted by the Honey Parfait.

OK, so it's pretty belated now, but it's been a busy year, and we're only a month in! 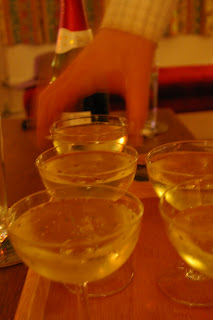 I have also re-entered the world of work. It's not that I haven't been working for the last 2 and a half years, but somehow supply-teaching almost seems like cheating... no planning, no staff-meetings, great daily pay, usually great fun... Still, despite the planning and staff meetings, I am having great fun at my new school. But who wouldn't love working here? 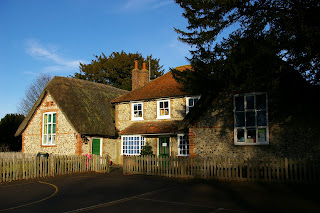 I am working on a part-time contract, so am able to continue supply work too. Life is good.