A Walk on the Wild Side

One of my greatest regrets about my time here in Canada - and believe me, I have very few regrets about these 2 years - has been that I have never seen a moose. I had just assumed that I would, particularly as we have had several trips to Algonquin Provincial Park, famous for its moose population.
Last weekend I decided that this situation must be rectified, so I announced to Rob that we were off to the Muskoka Wildlife Centre, about an hour's drive north of home. He seemed less than impressed, but wasn't quick enough to come up with an alternative plan, so we set off.
What a day we had! The Centre is wonderful - not a zoo, but an animal sanctuary, home to many animals native to Ontario that have been rescued from some truly tragic circumstances. Flower the skunk for example, had been orphaned at a young age, along with her 8 brothers and sisters. When their parents did not return to them one day, they all left their home to find food. Sadly the first food they came upon were poisonous berries, and they all died apart from Flower who was rescued and brought to the Centre. As a result of eating the poisonous berries she had developed epilepsy which caused her to spray uncontrollably. In order to give her - and presumably the staff of the Centre - a better quality of life, she was de-scented and has lived happily (and free from epileptic fits) at the centre for the past 10 years. 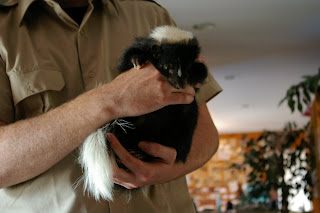 We arrived at the Centre just in time for the 11am 'Meet the Creatures' session and were delighted to be able to see several animals at close quarters. Meeting Flower was much more pleasant than our previous skunk encounters... we rarely ever see them, but believe me, it's very clear when one has wandered through the garden during the night..!
Many of the animals live happily with other creatures with whom you would not expect them to be friends. Flower for example shares a home with Clover the Groundhog, a highly comical and very greedy Woodchuck who was 'surplus to requirements' at an American zoo so brought to Muskoka to become part of their education programme. She seemed to be very at home there! 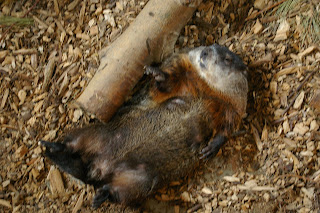 Indeed, several of the animals here had been born in zoos across the continent. We were very fortunate to visit while the Centre was providing a temporary home for Aurora and Borealis, two Arctic Wolf cubs. 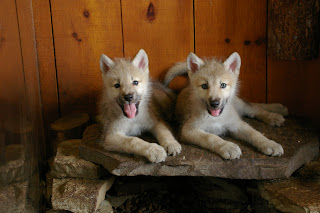 They were on their way to a zoo in America, and had been hand-reared since birth making them very comfortable with human company. They also seemed incredibly comfortable with their room-mate, a cheeky young raccoon with whom there was much comic rough-and-tumble! 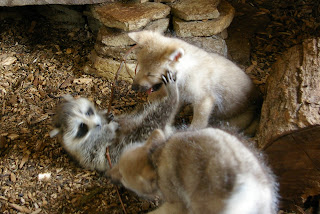 At the back of the Centre there was a winding path through the woods, along which were many cages housing a huge variety of rescued animals. We had seen a Black Bear whilst in the Rockies last Summer, but it was lovely to get a better view of one here in Muskoka - Kootenay, a Black Bear who had been kindly but misguidedly hand-reared by a family in British Columbia. Unable to be released into the wild, Kootenay now lives a relaxed life with Kokanee the Cougar. 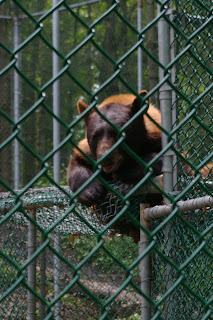 He seemed perfectly content with his life - although Kokanee looked less enthralled by being the object of so much human attention! 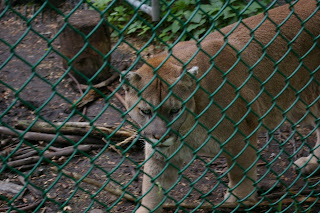 The path continued past wolves, bald eagles, beavers, wolverines, foxes, bobcats, - all manner of beasts. I was relatively disinterested in seeing Badgers - after all we have them in England - until I actually saw them! It appears that North American badgers are completely different to the badgers which I know and love - and these ones were extremely personable. Just look at that face. 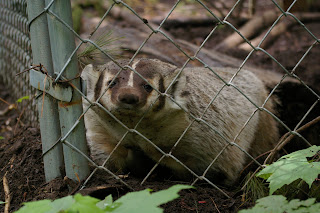 We were so captivated by the animals that we stayed to see the 1pm Meet the Creatures too, where I rashly volunteered to have Kingston the Black Rat Snake (a rescued pet) draped around my neck.

I felt privileged to witness such a fantastic organisation in action, doing incredible work both in the conservation of Canadian wildlife and in the education of the public.

And yes, I finally got to see my moose! Ugly beasts, but very splendid in their own unique way. 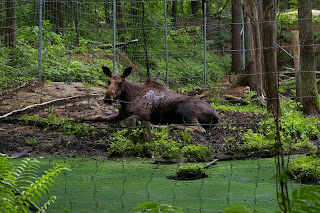 Having a husband who travels a lot for his work has some benefits, and the fact that my aforementioned husband shares my love of food, it definitely makes life more fun. I believe I have mentioned in a previous blog post how much Rob and I love foreign supermarkets, and when Rob goes on work-trips abroad he always makes an effort to browse around the local shops and will usually bring back some interesting foodstuffs. His trip to Italy last November yielded many foodie treats - beautiful dense fig cake, chewy honeyed nougat, and a box of marrons glaces. The fig cake and nougat were quickly eaten, but the marrons glaces had sat in the cupboard for far too long. I love eating them straight from the packet, but felt sure that I was missing the opportunity to make them into something divine.

As ever, a quick question on the forum produced just the answer - a reference to Clothilde's fabulous blog 'Chocolate and Zucchini', and a recipe for Coffee Cake Chocolate Marron Glace. Don't be fooled by the name - it's a cake made to be eaten with coffee, it doesn't contain any coffee flavour. What it does contain however, is marrons glaces and sweet chestnut puree... absolutely perfect as I also had a tin or two of this delectable treat loitering in the bottom of my baking box. Don't look too closely at the photo or my shocking disregard for date-stamps on food will become all too obvious. 2005? Pah! The date means 'best before', not 'poisonous after'... 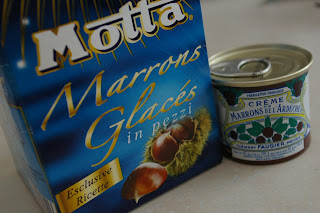 The recipe called for only half of the tin of chestnut puree, but I didn't think that using more would be a problem so I used the entire tin. I also used more marrons glaces as again, how could you have too many? For the chocolate element I used milk chocolate chips as this is what Rob prefers, and I thought that they worked very well in combination with the chestnut.

The addition of yoghurt to the cake mix produced a wonderfully moist sponge, and the profusion of chestnuts and puree sank into a wonderful dense sticky layer at the base of the cake. I think this would be fabulous as an elegant dinner-party dessert, perhaps with a dollop of whipped cream and an artistic sprinkling of icing sugar? However, we seem to have managed to eat the entire thing during the last week, simply as an accompaniment to our essential 4.30pm cup of tea. Fantastique - Merci beaucoup Clothilde! 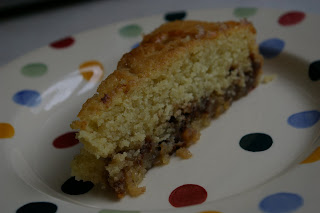 Bloody Men
Bloody men are like bloody buses
You wait for about a year
And as soon as one approaches your stop
Two or three others appear.

You look at them flashing their indicators,
Offering you a ride.
You're trying to read the destinations,
You haven't much time to decide.
If you make a mistake, there is no turning back.
Jump off, and you'll stand there and gaze
While the cars and the taxis and lorries go by
And the minutes, the hours, the days.
Wendy Cope
This poem always makes me smile, and sometimes I feel like re-writing it to fit various other situations... right now it should be 'Bloody Blogs'. I write nothing for what seems like months, and then all of a sudden I feel inspired to write several posts all at once.
Contrary to appearances I have been baking recently, but I have also been working full time. Just as one might assume that supply-work would be winding down for the end of the year, it's actually building to a crescendo - I'm feeling very in demand! I think that teachers are getting tired, busy writing report cards, and generally can't wait to get rid of their classes after 10 long months, so just as the children start to get hot and fractious they call in a supply teacher to spend the day with 30 kids in a non-air-conditioned classroom when the temperatures are in the high 30s. No, I exaggerate... slightly... I have had a few days like that, but generally I am loving my job and beginning to feel quite sad at the prospect of leaving the schools in which I have become a regular supply teacher.
Anyway, back to the baking... poor old Martha has lain rather neglected recently, but a few weeks ago I did try the Cream Cheese Swirl Blondies. I have long been intrigued by Brownie recipes that contain cream cheese - the tartness of the cheese would, I imagine, be a perfect foil to the intense chocolately sweetness of the brownie batter - but as I had all the ingredients for these blondies to hand, these are the ones I decided to make. I am too lazy to type out the recipe, but I found some much more conscientious blogger here who has already done so! Thanks Joe in Minnesota.
We enjoyed these blondies, but the whole 'swirling' business was a little tricky. The cream cheese mixture was really quite liquid, but the blondie dough was much denser, so the finished effect was less 'swirl' than 'splodge'. The difference in the batters also proved tricky as I think I must have plunged my cake-tester into some cream cheese batter when the allotted time was up. As it was still very sticky I decided that they weren't quite cooked... but 5 minutes later the blondie batter was slightly over-cooked. Maybe it was the extra cooking time, or maybe it was the recipe, but I found the finished items to be much more like cake than blondies, which I would have expected to be more moist and dense. Having said that, I'm being pretty critical - they tasted delicious. The cream cheese did indeed form a marriage made in kitchen-heaven with the sweet cake. I will definitely be trying Nigella's Cream Cheese Brownies based on the success of these. 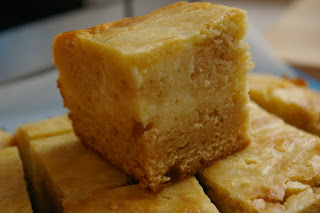