If you are North American the concept of Apple Butter will be familiar to you.  If you are not, then it quite probably won't!  As I discovered when we lived in Canada, Apple Butter has absolutely nothing to do with butter.  It doesn't contain it, it doesn't resemble it in the least, so why.....?!  I just don't know.  Apple Butter is a kind of apple puree, but extra concentrated so very 'appley' and usually spiced with cinnamon, nutmeg, cloves, etc.  It has a very Autumnal flavour to it because of these spices.

It can be spread on toast, or used to top pancakes, waffles and the like, it's sometimes used in low-fat baking recipes, I like it dolloped on Greek yoghurt as a dessert, or perhaps on granola for breakfast.  I have been pondering using it mixed with mincemeat in mince pies this Christmas too.  So quite a versatile thing to have around.

It's also an amazing way to use up a glut of apples without ending up with more apple-based preserves that you could possibly eat as the apples cook down so much.  Apart from the tedious peeling, coring and chopping involved, it's incredibly easy especially if you use, as I do, a slow cooker to make it.

This is the recipe I use, adapted from the blog Frugal Foodie Mama:

Ingredients:
Enough apples, peeled, cored and chopped into chunks, to fill your slow cooker.
250ml apple juice (I use one of the small cartons that my son loves)
200g soft brown sugar (mine is slightly tart, you could add a bit more if you prefer it sweeter)
Spices...  it's hard to be specific here, but in my last batch I used about 1 tsp cinnamon, about 1/4 of a nutmeg grated and about 1 tsp from a tin labelled 'mixed spice' which contains all manner of things but definitely cloves from what I can smell!

Method:
Put everything in the slow cooker.
Turn it on to 'high'.
Leave for as many hours as it takes to cook down to a dark brown sludgy mixture!  Mine took maybe 5 or 6 hours.
If it is still looking quite liquid you could leave the lid off the slow cooker to let some of it evaporate, but you are looking for a just-pourable puree.  Some recipes say to blend it until smooth but mine always cooks down to a smooth puree anyway, must be the Bramleys I use.
Taste (for sweetness) and then pot (while hot) in sterilised glass jars.

Not exactly a detailed or complex recipe, but these pictures may help.  You are basically looking for it to turn from this... 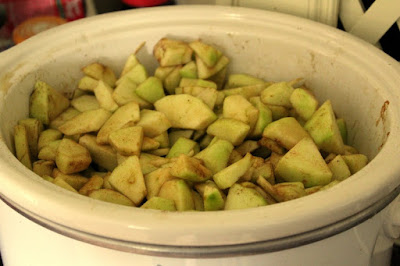 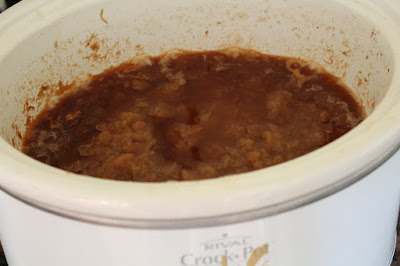 It doesn't look particularly attractive, but it tastes great.  I'll definitely need to make another batch though as this is all I have to show for it... 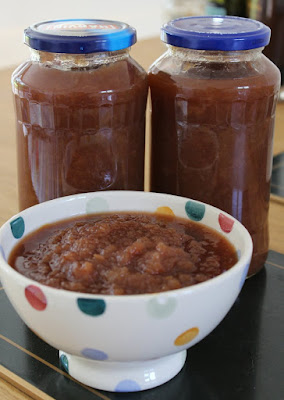 Another appley pudding this week, using a recipe that has (sort of) already appeared on this blog, although in a slightly different guise.  I have to admit that I am not a huge fan of fruit crumble as a pudding.  I don't dislike it of course (who could?!) but it's not something I'd necessarily choose.

This version of 'crumble' however would be top of my list of fruit-based puddings - Flapjack crumble!  I have made this many many times now using various fruit, but never I realised with just apples.  I was going to lunch with a friend and said I'd bring pudding so thought I'd give the apple version a try.

I gently stewed the chunks of apple with a tablespoon of sugar (use more or less according to taste/amount of apples) until just beginning to soften, then put them into a dish ready for their topping.  I couldn't tell you how many I used, just keep peeling and chopping until it looks right to you.

Here's how you make the flapjack:

In a bowl, mix together the oats, sugar and flour. Melt the butter in a saucepan. Now add the golden syrup and cream and mix well. Tip onto the oat mixture and stir together. (Note:  I had no cream in the house so didn't add any, but you could pop a little milk in if you thought it needed more liquid).  Spoon on top of the fruit, level out in a thin even layer about 1cm (½in) thick – try not to make it any thicker, or it may not cook through. Put in the oven and bake for 40–45 minutes, or until set and golden brown.   The recipe says 'spoon' onto the fruit, but I find it easier to use my hands - take pieces of the mixture and flatten them between your palms, then place them onto the fruit.  You can 'jigsaw' them together to cover the apples pretty easily.

Leave to stand for 10 minutes before eating so the top can set a little (this also prevents you from burning your tongue). Cream or vanilla ice cream are the obvious partners in crime. 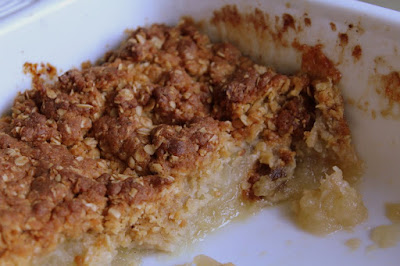 I only thought to take a photo when there was this tiny amount left, but you can see the knobbly flapjack topping, slightly chewy underneath but crunchy on top.  Delicious.
Posted by Norm at 20:15 2 comments:

I was browsing back through this blog earlier today, thinking that I needed some inspiration for a pudding this weekend, and I stumbled upon a post I'd written in 2008 which talked about our 'teeny tiny apple tree' next to the drive of Bramley Cottage.  It made me laugh because now, 7 years later, that tree is definitely not teeny tiny any more!  It's easily 10ft high - and probably 10ft wide too - and this year is absolutely laden with huge Bramley apples.  The apple crop seems to be superb on alternate years; last year I think we had the grand total of 3 apples on the tree, but thankfully I had made jars and jars of chutneys and apple jellies during the previous year's glut so it didn't particularly matter.  But this year it'll be back to the stove for multiple batches of apple-based preserves to see us through the next 2 years, and as many apple dishes as we can possibly eat! 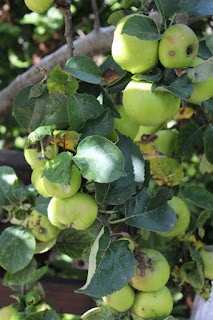 So I thought I'd keep an online 'apple diary' of the dishes that we make, sweet and savoury, to refer back to in future years when I'm drowning under the weight of apples again.

First off is an appley pudding that I first made back in 2008.  The recipe is already on this blog but buried in a long post about lots of recipes, so I thought it deserved repeating.  The recipe credit must go to Patricia Wells, but it was posted long ago in the food-forum to which I belong by a wonderful cook who went by the screen-name of 'Mary Apple'.  I have no record of whether this should be made with eating or cooking apples, but I like it with Bramleys as they provide a sharp contrast to the sweet batter and the sweetness of the vanilla custard with which we serve it.

In a pie pan (I used a 20cm springform) peel and slice 4 apples; I tend to quarter the apples and then slice them across each quarter to give approximately inch-square pieces.  (It's hard to judge this amount when using Bramleys as they vary so much in size, but I used 3 large ones - with lots of bruised and buggy bits cut out!  You need the pan to be about 3/4 full with apple.  Yes, that's a LOT of apples!)

Mix and pour over apples.  There won't be very much of this mixture, but stir it around in the sliced apples as much as you are able.

Bake at 350F/180C for about 20-25 min till light brown.  Some of the apple pieces may catch slightly if they are sticking up but this really doesn't matter.

Take out and top with a thin paste made from 3 tbsp softened butter, 1/3 cup sugar and 1 egg.

Put back in the oven until browned - about 10-15 minutes. 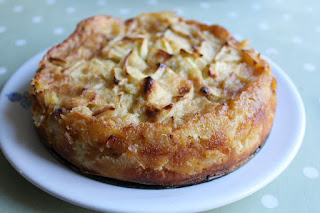 This is really more of a dessert than a cake as its a large proportion of apples to a rather smaller amount of batter.   The batter is partially cakey but also slightly reminiscent of clafoutis, that eggy batter pudding well-loved in France.  The buttery topping adds a slight crispness around the edges of the cake and a rich decadent flavour, almost caramel-like. 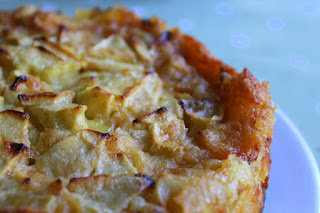 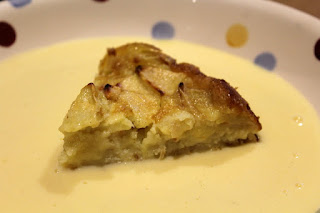 Served in a pool of custard.
Edited to add that this is also delicious servedwith half-fat crème fraîche.