Making granola - heck, even eating granola - can seem to mark you out as being a bit of a hippy.  But I'm holding up my hands and admitting it, it's my latest favourite breakfast!  I'm not a huge fan of cereals in general because I don't really like milk, but a bowl of this granola with a large splodge of full-fat Greek yoghurt, and maybe an extra drizzle of honey, can't be beaten.  This isn't the dusty muesli you can buy in every supermarket, this is a crunchy, nutty, fruity, even chocolately treat which is nonetheless full of slow-release energy in the form of oats, and plenty of 'good fats' in the nuts.  It certainly fills me up for the morning, reducing the desire for that mid-morning snack.

My neighbour Barbara inspired me a few months ago as I saw her making a large batch of granola using an Ottolenghi recipe.  I tasted some and thought I'd investigate making it myself.  Not actually owning any of Ottolenghi's books (I've had them out of the library instead), I found this recipe online, courtesy of the lovely 'Tasty Pi' blog.

I made this version a couple of times, but inevitably I'd find I didn't have quite the right amounts/types of nuts/fruit, so I soon began improvising.  Now I don't even look at the recipe when I make it, just throw things together.

All amounts are approximate, as are the ingredients...  It strikes me that it's a bit of a cheek to call this a recipe actually, but that's what I love about it!

400-500g oats (I use Tesco Value)
200 nuts - whatever you like.  I always use some chopped brazils, but also include almonds, peanuts, hazelnuts, cashews, whatever I happen to have.
100g seeds - again, whatever you like.  My current batch uses pumpkin seeds, but I often buy a bag of 'mixed seeds' to throw in.
1 tsp salt

Mix all the above ingredients together, then mix up the following:

100ml oil (I like to use coconut oil, but otherwise sunflower or vegetable oil is fine).
150ml honey (I sometimes supplement this with maple syrup, or some of the gingery syrup from a jar of preserved ginger)

I tend to warm this syrup in the microwave, especially if using coconut oil which is generally solid, then pour it over the oat mixture, stirring well.  I think the original Ottolenghi recipe uses rather more syrup for the dry mix, so it is stickier.  Mine is therefore a little drier and less sugary, but you could definitely use more oil and honey if you prefer your granola a little more sinful!

Spread the mixture out on a couple of baking trays, making a layer no more than 1cm thick.  Bake in a 140 degree oven for about 40 minutes, stirring a couple of times during the cooking time to ensure it's evenly browned.

When the granola is golden brown remove the trays from the oven and add about 200g chopped dried fruit.  This could be as simple as just sultanas, or as varied as you like.  I've used dates, apricots, cranberries, figs (actually, all the leftovers from when I made Christmas Puddings last year!).

And if you're feeling especially naughty, you could also follow my lead and sprinkle some dark chocolate over the hot granola...  I've used half a bar (50g) of Green & Blacks Maya Gold, chopped, when I've been very indulgent, but a cheaper brand - or indeed some chocolate chips - is fine too.

Leave to cool (the chocolate, if you've used it, will have helped to clump the granola together as it's melted and cooled), then store in an airtight container.  A batch this size lasts me 2-3 weeks (and no one else is allowed to eat it!) so I know it keeps perfectly well for at least that long. 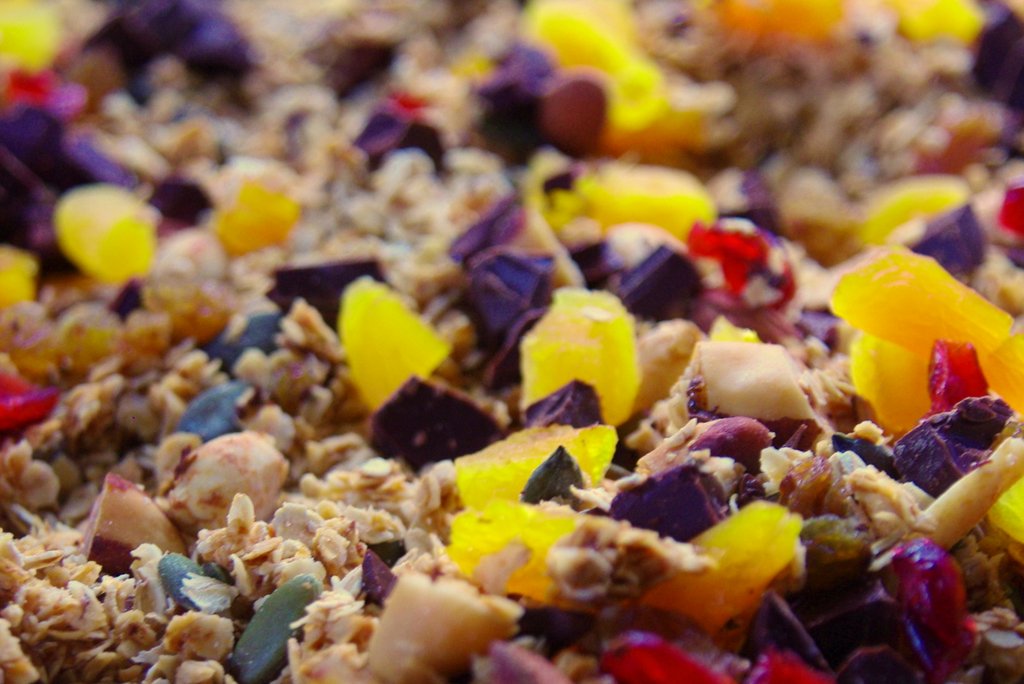 Chicken Breasts with Parmesan and Herbs

Salisbury Library has an awesome selection of cookery books, so while Ted browses in the children's section, I can usually be found not far away (keeping a watchful eye on him!) at the food and cookery shelves.  I can always find someghing I fancy looking and cooking through, and it means I can experiment with lots of different writers and recipes without spending huge amounts of money buying cookbooks I have nowhere to store.  It's a win-win situation.

This week I have out Lisa Faulker's second cookbook, The Way I Cook.  I'm not a huge Celebrity Masterchef fan, and didn't watch the series that she won, but I've always liked her as an actress, and she comes across very well in this book; friendly and down-to-earth. 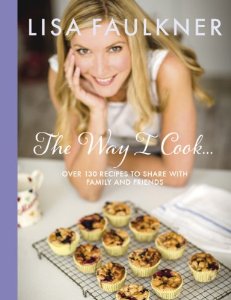 So far I have made a couple of recipes from this book, a Leek & Garlic tart which, while delicious, didn't quite live up to Ottolenghi's amazing Caramelised Garlic Tart (from Plenty), and a lovely chicken breast dish which I want to remember, hence this blog post.  The recipe title is actually 'Chicken Breasts with Parmesan and Parsley' but as I have an illogical aversion to parsley I substituted it for thyme which was delicious.  I'd imagine that other herbs could be used too to good effect, perhaps rosemary, sage or oregano?

Anyway, this recipe is incredibly simple and quick, and has the added bonus of being made from things that I pretty much always have in the fridge/freezer/cupboard, so I suspect it may become a staple in this household.  The recipe in the book is for 4, but as I cooked it for just 2 I have halved it here, although I've kept the lemon juice amount as written and would double it if I was cooking for 4:

Wrap the chicken breasts in clingfilm and flatten by hitting with a rolling pin (fun!).

Put the beaten eggs, cheese, herbs and salt and pepper in a bowl and mix together.  Put the flour in another bowl.  Coat the chicken in flour first, tapping gently to remove any excess, then dip in the egg mixture.

Heat the oil in a frying pan and fry the coated chicken breasts over a medium-high heat for about 5 minutes on each side.  Add the butter as you turn the chicken.

Set the chicken aside to rest, then add the lemon juice to the buttery oil in the pan.  This can be used as a dressing for a side salad, or a light sauce.

Lisa suggests serving this with spaghetti, but I served it with new potatoes.  Sprinkle with the extra herbs as you serve it.
Posted by Norm at 13:13 3 comments: