I sometimes feel that I shouldn't bake too much as, you know, I'd only eat it all myself...  But I have recently solved that problem by rediscovering the satisfying glow caused by the giving of cake as a gift, specifically to 2 friends who have recently had babies.  After all, what's a more welcome gift in that sleep-deprived and mind-numbingly-exhausting time than cake?!  Not a cake that you need to find a knife to cut and plates on which to serve it - no, all too much to deal with when you have a newborn baby - you need a cake that you can grab, ready cut, from the bag, box or tin in which it is presented.  Brownies seemed to me to fulfil that brief.

A few months ago I bought 'Cake' by Rachel Allen.  It's a lovely book with many recipes that I have bookmarked as 'must makes'; my only criticism is that I wish there were pictures to accompany every recipe.  However, I'm willing to forgive that as every cake I have made from it so far has been good.  Really good.

With a bunch of bananas quietly getting blacker by the day in my fruit bowl, I was quickly drawn to the recipe for Banoffee Blondies.  This requires the extra step of making an almond praline (just melting sugar in a pan with the almonds, then tipping it onto a tray to cool before blitzing it to rubble in a food processor) but believe me, it's an extra step well worth taking; the nutty crunch that results provides a fantastic texture within the moist cake.  I also, purposely, didn't completely melt the white chocolate so there were some chunks remaining within the mixture.

The recipe can be found here, although to be ever-so-slightly smug, I can't help but feel that mine look a lot nicer than the ones in the link.  To me they look too dry and cakey, whereas mine had the requisite 'squidge' that any blondie or brownie worth its salt should have. 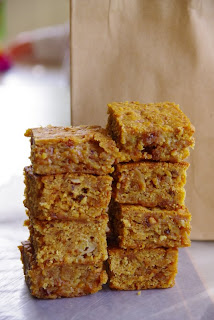 Next on my list was Cheesecake Brownies.  This isn't a new idea, but a cream-cheese layer swirled onto the top of a brownie mix makes a classic combination.  I have found previous attempts at this idea tricky to 'swirl', as the two different batters can be of different consistencies, but I had no such problem with this recipe.  Mine didn't look quite as artistic as the ones in the book, but they tasted great.  I love the tang of the cream cheese with the sweetness of the brownie.  Again, these turned out dense and squidgy, just perfect.  The recipe can be found here. 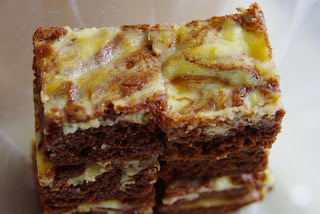 I was really pleased to find two recipes in one week that I could mentally bookmark as 'keepers', I'll definitely be making both again.  Next however on my list from this book is (a request from my husband) Peanut Butter Brownies... watch this space!
Posted by Norm at 19:44 1 comment: