The house that we own is called 'Bramley Cottage'. Sweet eh? With a name like that, you'd obviously expect it to have an orchard, or perhaps a stand of ancient apple trees? But no, Bramley Cottage has one teeny tiny apple tree. The trunk is so thin that I can encircle it with one hand, and it's barely taller than my head. In Autumn 2005 it produced 3 apples. Admittedly we have been away for a couple of years, and we're not living there now either, but I think I may have to wait several more years before I can harvest a bumper crop.

But actually I don't think this is a problem. You see, it seems that anyone with an apple tree can't seem to give away enough apples! Everywhere we drive or cycle in the local area, we see boxes, buckets, wheelbarrows of apples sitting on people's driveways, with handwritten notices imploring passers by to 'Please take some apples!' And I don't need telling twice.

We have one particularly great supplier, a lady in nearby Wendover who has 20 - yes TWENTY - Bramley trees. It takes me ten minutes to cycle out to her house... but rather long to cycle back, my handlebar-bag bulging with fruit, so heavy that it's scraping on the front wheel. Here's just some of our latest haul: 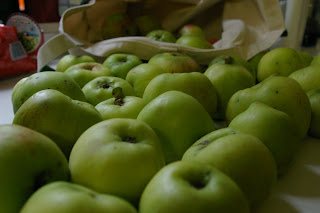 I love to eat seaonally, and part of this is the challenge of making the very most of whatever is ripe and ready - a glut of produce is so often the result. Although there are times when I think that I will never want to eat another apple dish again, I know that many apple-free months will follow, and I will appreciate the fact that I made the very most of the apples when they were so plentiful.

Our favourite savoury apple dish is one from Delia Smith's classic 'Complete Cookery Course' entitled 'Pork with Apples and Cider' (p197-8 for those of you with the same attractively brown-covered edition that I have. These pages arae well-spattered in my book, attesting to the number of times that we have made this dish). It involves the long, slow cooking of pork chops, bacon, onions, apples and garlic. They are cooked in dry cider, with a topping of sliced potatoes. It's not something that I have ever taken a photo of, but at we are currently eating this once a week, so perhaps I should?

Last weekend's roast dinner was a leg of pork. We did eat pork in Canada, but rarely (if ever?) managed to buy a joint with the skin still on, thereby depriving us of the best part of the meal - crackling. This was reason enough to roast the pork last Saturday, but it had the added bonus of using up three large apples for a pan of apple sauce to accompany the meat - and make some amazing sandwiches with pork, apple sauce and sage & onion stuffing during the following week!

Still on the savoury theme, I have stocked our cupboards with two types of apple chutney - perfect with cheese sandwiches - and apple and mint jelly - perfect with roast lamb.

I know many people dislike using fruit in savoury dishes. This is fortunately not a problem in our household (I love it!), but it is in sweet dishes that I find it easiest to use up the apples. In recent weeks I have experimented with some new recipes involving apples - not all of them meant to be involving apples, but...

Many of my friends rave about a recipe for Plum Torte, published in the New York Times (you can find it here). I had long intended to make this, but when I managed to pick up a large bowl of deliciously ripe plums at a local market I had no excuse. I added 2 finely chopped apples to the batter, which made it much more of a pudding than a cake, beautifully moist and squidgy. 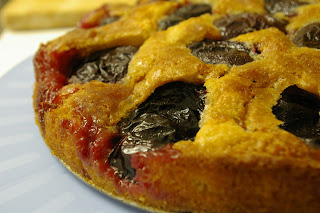 I also made a wonderful Apple Cake, the recipe for which was posted by the aptly named 'Mary Apple'! I think it originated from Patricia Wells, but to me it will always be Mary Apple's Cake. Sadly I can't produce a picture for this one. This cake was fabulous - again rather more of a pudding, with a batter-like cake barely enveloping the sliced apples. It was devoured by the two of us in an embarrassingly short time - half went with our afternoon cuppa, and the other half warmed for a post-supper pudding. I daren't make it again... If you feel like risking it, here's the simple recipe:

In a pie pan (I used a 20cm springform) peel and slice 4 apples.

Mix and pour over apples.

And finally, last week I wanted to bake cupcakes. I don't do this often, but I had been given a wonderful box of 'Heavenly Cakes' mix (bought almost entirely for the beautiful packaging!) which I had been meaning to make for months. This is no ordinary cake-mix, it's produced by Rose Levy Berenbaum, author of The Cake Bible. It included Green & Blacks cocoa, and Madagascan vanilla -all top-quality ingredients. I also added two finely chopped apples to the mix (because did I mention we have lots of apples to use up?!), and the combination of chocolate cake and the tartness of the cooked apple pieces worked incredibly well. 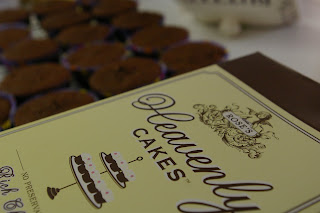 I topped the cupcakes with a Swiss Buttercream icing (which I had been dying to try since reading about Project Wedding Cake in the Smitten Kitchen!), and scattered with milk-chocolate chips, for that 'kids'-birthday-party' feel. Cake, apples, buttercream, chocolate chips = perfection in a cupcake case. 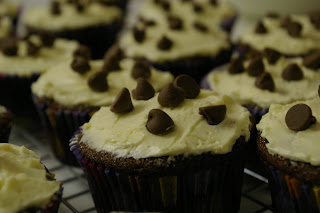 In Praise of Pies

Autumn... season of mists, mellow fruitfulness, and pies. I'm sure that's what John Keats wanted to write, but perhaps it didn't quite scan? Anyhow, we've had the mists, our abundance of apples and blackberries is testament to the fruitfulness of the season, and now we've had the pies.

My first pie of Autumn was sampled in Oxford last week. As my friend and I browsed through the Covered Market, mid-morning, we were assailed by the incredible smell emanating from this shop - Pieminister. It was only 10.30 am, perhaps a little premature for lunch..? Reluctantly we walked on by, but returned a couple of hours later, now with a fierce hunger from some serious shopping and a speedy half in the Turf Tavern to whet our appetites still further.

Do check out the Pieminister website for detailed descriptions of their wares - and see if you can resist the online shopping feature... I have just spent a happy few minutes filling the box with virtual pies, and it's only my ever-weakening willpower that's stopped me clicking on the 'confirm order' button.

My dining companion went for the 'Chicken of Aragon' pie and proclaimed it to be the best pie she'd ever eaten. I had the 'Matador Pie' - beef, chorizo, butterbeans, olives and sherry. Quite an unusual flavour combination, but the gamble paid off. It was right up there, jostling for first place with, um, I don't know. Maybe it was the best pie I've ever eaten too? The fillings were delicious, but the pastry, often to hard to perfect, was perfection itself; crisp and crumbly. And I love a business with a sense of humour - check out 'Pie Minister's Question Time' on their website! 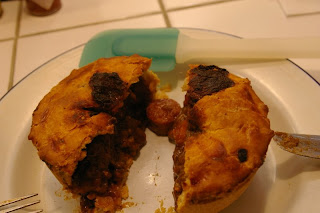 Here's the Matador pie. We resisted the option to add mash and mushy peas, these pies were big. (Ignore the spatula, it's just a private joke between me and 50 of my closest friends...)

I am very fortunate to have married someone who loves food and loves cooking. However, during our 4 years of marriage we've learnt the hard way that the kitchen - any kitchen - is only big enough for one chef. On Saturday we were both in a bad mood after a morning of shopping - me because I'd much rather go to Tescos on my own, and him because he wanted a roast dinner and I'm not a mind reader... So, I left him alone in the kitchen to make the pie that he had grudgingly agreed to have for supper. Unable to find beef kidney for the planned S&K pie, we had settled on beef and mushroom as a filling. Despite the fact that I should know to keep well clear, I couldn't resist suggesting the addition of blue cheese. It was a good call. That's just about the only credit I can take for this though - it was a fabulous pie, emerging triumphantly from the oven, and banishing all hints of our previous bad moods. 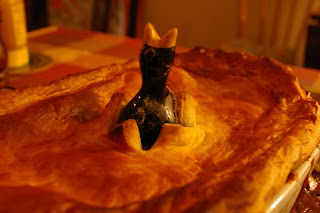 The filling had been slow-cooked for 2 hours before the pie was assembled, and the steak was meltingly tender. The blue cheese was a strong flavour, but not overpowering, just giving the sauce a slight salty sharpness. 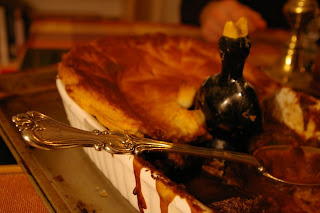 I could criticize Rob for ignoring my suggestion that he use the larger pie dish, but as he remembered, unprompted, to put it on a baking tray in the oven I'll let that one slide. I quite like the look of the overflowing sauce actually. 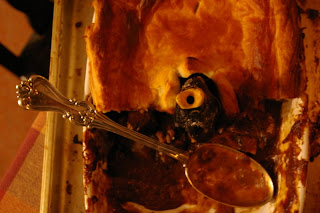 So, as you can see there's another portion of perfect pie waiting to be called into service as a warming Autumnal supper this week. When there's food like this to look forward to, I find myself actually enjoying the fact that the days are getting colder.

It has occured to me that this might be a good time to mention another famous pie-producer in this part of the world... M. Newitt and Sons is a butcher's shop in nearby Thame, Oxfordshire. Michael Newitt is my uncle, and his sons James and Tom are my cousins. This is one famiy business that it's no hardship to support! Their wares are also sold in Budgens supermarkets, my local one being about a mile from home. Perhaps my love of pies is inherited?