In these internet-dominated days there has been much discussion about whether or not to send Christmas cards any more.  A greeting on Facebook is instant - and free - and can reach friends and family around the world at the click of a mouse.  I'm a huge fan of this idea, having friends in several different countries, but a part of me is still extremely fond of the ritual of writing, sending and receiving 'real' cards.  So this year I've done it both ways!

Of course having a baby in the house provides all manner of excitement over the festive season.  Poor Ted has been subject to all manner of comedy dressing up - not that he seems to mind too much... 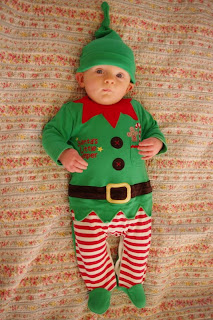 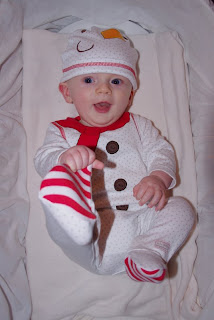 But he was more than slightly baffled when I plonked him in his Bumbo and starting painting his feet! 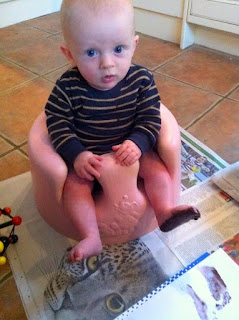 He soon began to enjoy it though; I suspect it tickled a bit! 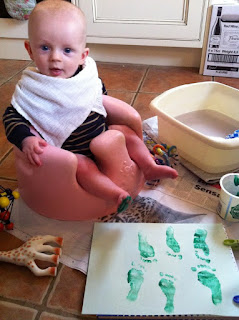 In order to get good prints I discovered that best best thing to do was to use clothes-pegs to attach the paper to a hardback book.  You can then press the book onto the foot, rather than the other way round!  As you can see I also covered the floor with newspaper and had a bowl of warm water and a cloth within easy reach.  This worked really well.  He couldn't reach his paint-covered feet whilst wedged into the Bumbo, and he remained pretty cheerful whilst I covered at least 20 sheets of paper with his footprints!  Many were unusable, but I decided that if I did loads I'd get enough that were suitable. 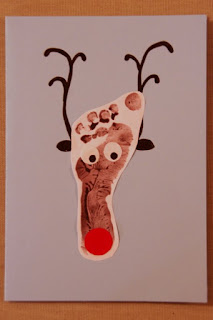 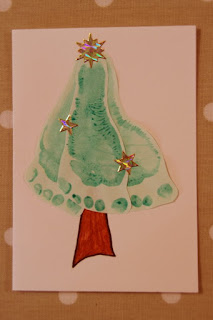 Once the footprints were dry I cut them out and spent an evening in front of some festive television turning them into cards.  The reindeer ears and antlers are drawn on with felt pen, and the noses and eyes cut out of paper before being glued on.  The tree trunk is simply drawn with coloured pen, and the tree adorned with some sparkly stickers.  The reindeer are my favourite.

This was a fun project and a nice memento of Ted's first Christmas.  It seems that I'm not the only mum who had this idea:  here's Nic's Christmas card made by her little boy.

I hope you all had a very Merry Christmas! 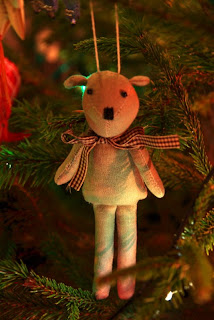 I've never had much success making flapjack.  Although perhaps that's because I've only tried once.  I think I used Nigella's recipe from Domestic Goddess, and remember being distinctly underwhelmed by the result.  I don't know why I haven't tried again, perhaps with another recipe, because I think a good flapjack is hard to beat.  For me they have to be chewy and soft; just holding together, but not hard and crunchy.  Flapjack nirvana!

Well now I have managed to make the perfect flapjack, and even better it's part of a luscious Autumnal pudding.

I stumbled upon this recipe in the Sunday Times magazine several weeks ago.  It's by Lucas Hollweg, who I believe has a new cookbook out.  I've never been a huge fan of a traditional crumble topping, but the idea of a flapjack crumble sounded wonderful to me, so when I saw plums for sale on Salisbury Market I knew I had to try.

I followed the recipe to the letter and the result was simply delicious - squidgy soft flapjack with the gingery fruit bubbling through.  It was fabulous hot, but I couldn't stop myself taking a teaspoon to the fridge throughout the following day to nibble away at it cold!

I've since made the same topping to go on a base of gingery stewed rhubarb, and can report that it was similarly successful.

I think this is a recipe that I'll be using time and time again.

Put the plums in a saucepan with the ginger and ginger syrup, plus the cinnamon and a knob of butter. Heat gently for a few minutes, until the plums have started to soften.

In a bowl, mix together the oats, the remaining sugar and the flour. Melt the butter in a saucepan. Now add the golden syrup and cream and mix well. Tip onto the oat mixture and stir together. Spoon on top of the fruit, level out in a thin even layer about 1cm (½in) thick – try not to make it any thicker, or it may not cook through. Put in the oven and bake for 40–45 minutes, or until set and golden brown.

Leave to stand for 10 minutes before eating so the top can set a little (this also prevents you from burning your tongue). Cream or vanilla ice cream are the obvious partners in crime. 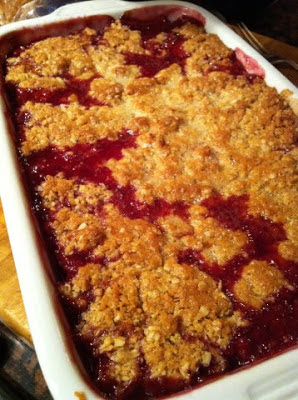