If you'd like to be pregnant, but aren't, it seems like everyone around you is.
Nothing too surprising there I suppose, as if you're at the age where you're considering producing kids, then chances are so are many of your friends.  However...

If you have problems getting pregnant, you are not alone.
We didn't make it public, but we tried for ages - years - to conceive, and when all investigations produced the same frustrating result of 'unexplained infertility' we tried IUI.  This is a small step on the way towards IVF, but not nearly so traumatic or invasive (or expensive!).  We had 2 rounds, and hit the jackpot on round 2.  Whilst I didn't talk about this while we were going through it, I'm more than happy to do so now.  As soon as you mention the words 'fertility treatment' it suddenly seems as though approximately half of the mothers you speak to have been through some kind of medical intervention in order to get pregnant.  I've lost count of the number of people who have said 'oh yes, I had IVF/IUI/ICSI'.  Either that, or had one or more miscarriages before successfully having a baby.  I wouldn't want to start speculating on the reasons for this, but the upshot is...

NEVER ask.
Think about it.  If you ask a married/partnered woman of 'a certain age' if they are going to have children, there are 3 possible answers:
1) "No, we don't want children".  Fair enough, but likely to be a decision that was taken after quite a lot of agonising, and doubtless an incredibly personal one.  I/we toyed with this option, but it's a huge decision to make and for many people may not be something they wish to explain or be questioned about.
2) "Yes, we'd like to one day but not yet".  This is the least painful of all the answers, but believe me, it may not be the truth.  I found it much easier to spout this one rather than the alternative below:
3) "We'd love to but we can't" (usually followed by tears, either in public or once one has reached the safety of one's house/car).
Taking into account what I have noticed about the number of people who go through the agonies of infertility, this question, however kindly or innocently meant, is more than likely to cause some pain.  It's personal, just don't ask.

And continuing the theme...

Jokes about pregnancy when you're not pregnant are simply not funny.
Infertility is rarely amusing (unless you read this blog which always gave me a giggle!).  'Hilarious' quips about the possibility of you being pregnant, or suggestions that you might be (accompanied with a nudge and a wink) simply because you complain that you're tired, or were sick, do nothing to make your non-pregnant situation any more palatable.  I will be forever grateful to certain key people in my life who never EVER mentioned, suggested, asked or joked about my childless state.  Some did, and it hurt.

But on a more cheerful note...

Once you get pregnant everyone wants to share their pregnancy experiences.
This is either endlessly fascinating, wonderfully reassuring or hideously offputting; it depends on one's mood and who is talking to you.  Take your cues from the pregnant woman concerned and if she looks like she's about to faint or vomit, then please, stop telling the gory birth-story and move onto something more cheerful!  And remember, please don't express horror or surprise about people's pregnancy symptoms (or lack of them) because...

There is no 'normal' when it comes to pregnancy.
Just as every child is different, so is every pregnancy and birth.  It took me months to realise this.  I was in bits during my first trimester, worrying that I didn't have morning sickness - surely something must be wrong with me/the baby?!  The worrying didn't stop once I entered my second trimester - now it was 'why isn't my bump bigger?!'.  Now I've reached the final third I'm finally accepting that we're all different, and that's OK.  I now appreciate my 'neat' bump and am naively telling myself that it means I'll have no trouble slipping back into my pre-pregnancy clothes, and will have no sign of stretchmarks (yeah, please don't disillusion me).

Pregnancy is scary.
No matter how much you want it, some pretty freaky crap happens to your body after you conceive.  I know some people adore it, and the general consensus is that you must be in a permanent state of bliss about the burgeoning life inside you, but I've been pretty weirded out by it at times.  Like when you feel the baby start to move...  yes, it's lovely in some ways, but downright alien in others, and sometimes deeply uncomfortable (leave my bladder alone please child...).  Earlier this week my belly-button started to pop out - ick!  The expectation is that it's all 'lovely' but I have had conversations with several friends that reassure me I'm not alone in finding it all rather bizarre.  Amazing, miraculous and incredible of course, but freaky and weird nonetheless.  I don't think it'll make me a bad mother that I feel a bit like this.

Your bump - once it begins to show - becomes a hand-magnet.
This was strange at first, but I just find it quite amusing now.  I would never consider touching anyone's stomach in normal circumstances, but somehow pregnancy breaks down those social barriers for many people and you suddenly find your belly being stroked by people who are not your beloved partner.  It just makes me laugh when people I know do it, but it would be very odd if a stranger tried...  I have one friend who was moving house in late pregnancy and one of the removal men lunged in for a belly-rub - eek!

Sometimes you can feel that there is waaaaay too much advice out there.
So grit your teeth, read what you think is useful and make your own decisions.  Many people are very cautious in pregnancy, but many others blithely disregard all advice claiming that drinking wine/eating rare meat/smoked salmon/blue cheese never hurt anyone.  You just have to choose your own path and do what's comfortable for you.  I err on the side of cautiousness regarding food after a particularly unpleasant bout of gastro-nastiness had me hooked up to a drip in hospital for a day when I was 9 weeks pregnant.  I was convinced I'd given myself listeriosis and would lose the baby, because I had accidentally eaten some out-of-date yoghurt.  All turned out to be fine, but it's left mental scars and has affected what I eat now.  But conversely I'm quite happy to have a slurp or 3 of wine every now and again.  My basic rule is that if you're thinking about eating something that will make you worry for the next 24 hours, then it's just not worth it, whatever anyone else may say.  It's only 9 months of your life - and just think of all those rare steaks and blue cheese you can enjoy once the baby's born.

Whilst your pregnancy is fascinating to you, it may not be to everyone else.
Actually I knew this before I got pregnant, and let's be honest, don't we all find it difficult to get enthusiastic about grainy scan-pictures that quite frankly all look the same?  (Er, or it might be just me...).  I show people my scan pics if they ask (I have them on my phone as the hospital here has always 'run out of paper' in the ultrasound room here), and e.mail them to my best mate and a few family members, but don't really feel the need to publish them on Facebook.  I don't really mind if other people do, but they don't particularly excite me.  And what's with the 3D scans?  They did one on me a few weeks ago and I nearly shrieked in horror - I appear to have an alien inside me!  I do worry that I'll become a baby-bore, especially as I won't be returning to work for a while... but I am vowing here publicly that I will restrict myself to a limited number of baby/child-related Facebook status-update per week so I don't find myself being defriended or hidden by all my friends!

It's more or less expected that you will find out the sex of your unborn child and publicise its name long before you give birth.
We have chosen not to find out - despite asking the sonographer to write it on a piece of paper for us 'just in case' we wanted to know! - and it appears that we are pretty unusual nowadays.  It doesn't bother me, it's just an interesting phenomonen.  We have some names chosen, but I don't know whether we will change our minds about them, so for now they're under wraps. 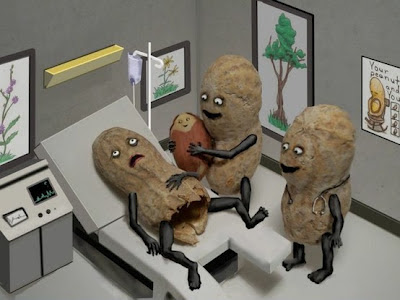 So Baby Norm should be making his or her appearance at the end of June/beginning of July.  And despite what I said in my final point, I can promise that it won't really be called Norm!
Posted by Norm at 09:22 8 comments:

So Stanley and I have just returned from our holiday (Rob came too!).  We spent nearly 2 weeks touring round south-eastern Australia in a little camper-van, and had a fantastic time.

Here's some snaps of Stanley on the trip...

We spent the first day in Melbourne with the lovely Sarah who showed us around.  Here's Stanley and me on the beach at St Kilda. 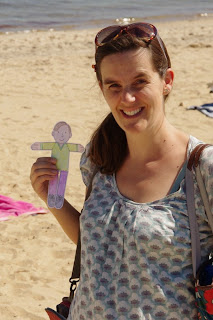 I'm sure Stanley would have loved the rollercoasters at Luna Park in St Kilda, but I'm far too much of a wuss for that! 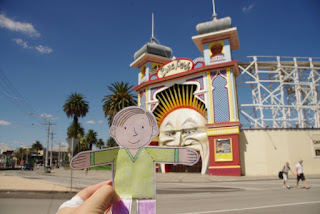 We got a great view of Melbourne from atop the Shrine of Remembrance. 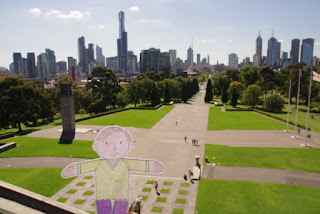 Leaving Melbourne, we drove West along the Great Ocean Road.  Here's Stanley posing in front of the Twelve Apostles.  What you can't see is the 300 baffled Japanese tourists standing behind me wondering what on earth I'm doing...! 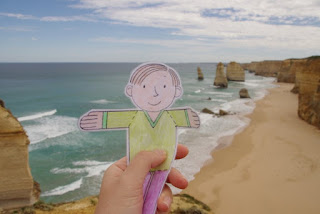 The furthest point of our drive was Sydney, and Stanley certainly enjoyed seeing the sights here! 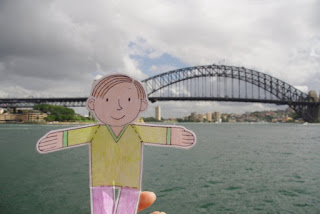 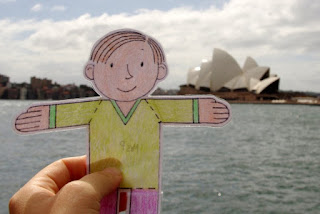 He narrowly missed a dip in the harbour itself actually, as it was pretty breezy on the ferry to Manly.  Sorry Stanley, I wouldn't have been diving in to save you! 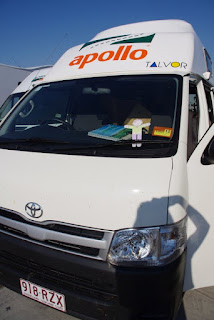 A final farewell to our trusty van at the end of the trip.  Stanley had a great time, and was very relieved that despite the excess of exciting wildlife in Australia (we saw koalas, kangaroos and emus, to name but 3), there were no hungry monkeys around to torment him!

I can't wait to see where my class's Stanleys have headed off to this holiday...
Posted by Norm at 12:38 2 comments: