In March this year we spent a week in Lisbon, the beautiful capital of Portugal.  It was our first trip abroad with Ted, and an all-round success, we loved it.  True to form a big part of the holiday's success was the food involved!  We were staying in a self-catering apartment (for ease with a baby) so cooked for ourselves every evening.  I don't think we managed to eat a huge amount of 'traditional' Portuguese food, as Rob isn't really a seafood fan, and neither of us fancied tackling one of the slabs of salt-cod we saw for sale everywhere, but one typical local delight that we did eat rather a lot of was Pasteis de Nata, Portuguese custard tarts. 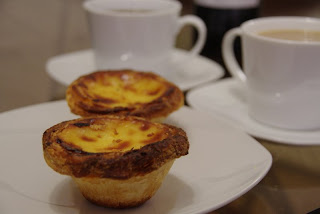 We would buy a 4-pack of these every day from the local supermarket...  one each for morning coffee, one each for afternoon tea! 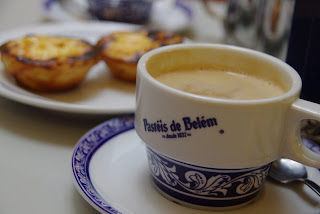 We also took every opportunity to have these when out and about in the city.  This was a very famous cafe in Belem which specialised in these pastries. 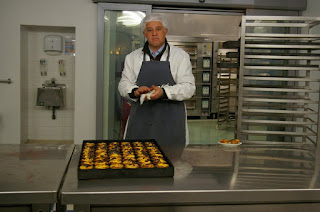 Pasteis de Nata are a far cry from the custard tarts that we know and love in England.  English custard tarts are made with short, sweet pastry, sprinkled with nutmeg, then cooked slowly to set the eggy custard to a gentle wobble.  Portuguese custard tarts are made with flaky puff pastry, and blasted at super-high heat to puff the pastry and scorch the custard within.  I'd heard that it was tricky to recreate these delights at home as you can't really get a domestic oven to the requisite heat, but I thought I'd give them a try anyway.

I have a couple of Facebook friends who are also big fans of Pasteis de Nata (hi Helen and Tina!), and stumbled upon a discussion about them in which a Portuguese friend of Helen's posted a link to the following recipe on Leite's Culinaria.  I figured that as she was Portuguese this was as good a recommendation as any, so this is what I used.

*Lazy Cook Alert*...  I couldn't be bothered to make my own puff pastry (hangs head in shame) so used a ready-made sheet of it.  I'm actually glad that I did as making the custard was quite a palaver, requiring sugar syrup, a sugar thermometer, and rather vague instructions such as 'stir for a minute until very warm but not hot' (note: I erred on the side of cool, not wishing to scramble the eggs); and let's face it, my baking is usually time-restricted to fit in with Ted's midday nap.  I just wouldn't have had time to make the pastry too.  If you choose to have a go at this recipe, bear in mind that for this amount of custard you will need TWO sheets of puff pastry.  I only had one, so now have half the custard in a jug in the fridge waiting for me to buy another sheet to use it up.  So either buy two, or halve the custard recipe. 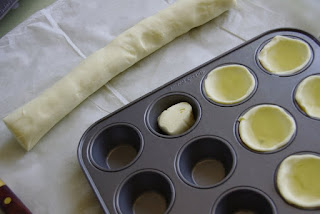 You create the signature 'swirly' base of the tarts by rolling the pastry into a log, then cutting sections and squidging them into the holes of the muffin tin.  This bit was fun, but take it from me, you need to grease the tin first...  oops! 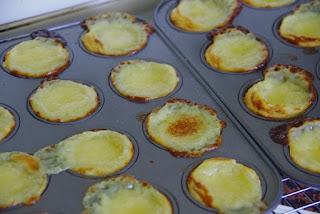 It was NOT easy to extract the tarts from the tin.  So much for non-stick! 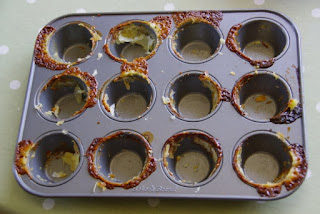 The recipe states that they need to cook for 8-9 minutes, but I found that after this time the pastry was still uncooked so I put them in for another 3 minutes.  I then removed them from the tin (with some difficulty!) and placed the tarts back into the hot oven in order to crisp up the bases and sides a little more.  Perhaps you wouldn't need to do this if your oven was a bit hotter, but mine only goes up to 250 degrees, not the 290 the recipe requires.

And the results?  A little rustic perhaps, but pretty darn authentic as far as we are concerned!   Being mini-muffin-sized it's dangerously easy to eat several at one sitting.  As we found in Lisbon, these are at their nicest when warmed slightly in the oven before eating, and you can add an optional sprinkling of cinnamon or icing sugar if you choose. 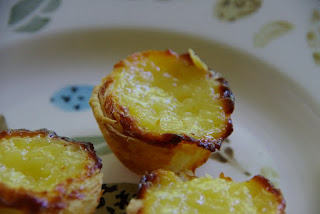 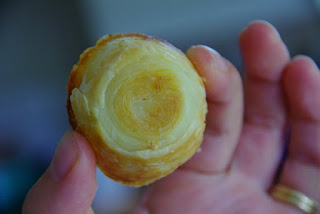 Swirly base (not a soggy bottom in sight!)

I'll definitely try these again in the future, greasing the tin next time, and also perhaps filling them slightly less full to avoid quite so much overflow.  This half-recipe made 23 mini tarts, but I will cut the next sheet of puff pastry into only 20 (the full recipes says it makes 40) as with some of my tarts the pastry was a little thin.