Easter is proving to be a strange time here in Brunei.  In the UK the shops are no doubt filled with the secular signs of the season - chicks and rabbits and chocolate eggs - and churches across the country will be preparing for the most important event in the Christian calendar (and oh how I miss my church-choir days at this time of year).  But here... nothing.  Not even a day off work on Good Friday or Easter Monday.
My only Easter egg has been a lone Cadbury's mini-egg which was perched atop a chocolate-crispy-cake nest at Book Club last week (thanks Lis!).  Still, I suppose I should just take the view that it's much healthier not to be stuffing my face with chocolate this year, and virtuously nibble on some fresh papaya instead...

But I couldn't let the season pass without some culinary celebration.  We've planned a roast for Sunday (chicken, because the only joints of lamb we could find were vast frozen legs of it which would never fit into our tiny oven) and I'm making a fresh lemony drizzle cake, which always puts me in mind of Spring.

In previous years I've made a Simnel Cake, but somehow didn't fancy that this year.  The recipe I like to use includes a lot of dried fruit, notably pears, and I just haven't seen them in the shops here.  So last night - on Good Friday itself - I decided to have my first ever attempt at Hot Cross Buns and I turned straight to Nigella for inspiration, 'Feast' to be exact.

The recipe can be found here, on Nigella's own website.

You begin by heating milk and butter with cardamom pods and cloves.  I threw in several extra cardamom pods as I love them and I was worried mine might be losing their flavour (although they are a relatively 'new' purchase, being only 18 months out of date!)  The recipe also calls for the zest of an orange, but I didn't have any so added a tsp each of Boyajian Orange oil and Lemon oil.  The smells wafting from this pan were incredible! 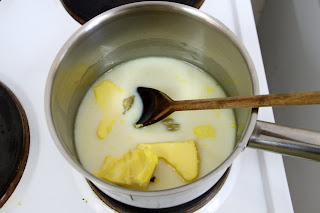 This recipe proved an excellent way of using up some of the things lurking in the cupboards:  My Canadian friends will recognise these 'Club House' brand spices, which dates them to our time living in Ontario from 2006-2008...  but they have no use-by dates, and still smell fragrant and delicious, so I will just keep using them. 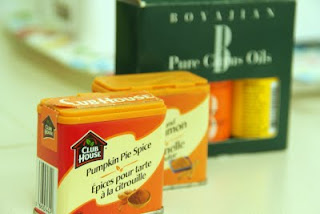 I used Pumpkin Pie Spice (which is a heady mixture of cinnamon, ginger, nutmeg, allspice and cloves), plus some extra cinnamon. 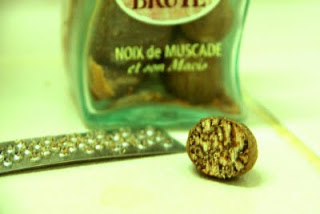 I also grated in plenty of extra nutmeg - my favourite spice I think. 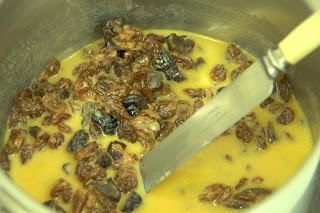 The sultanas were looking a little dry and unappetising, so I had the brainwave of putting them into the warm buttery milk to rehydrate.  This was an excellent idea, apart from 2 fatal flaws...  it meant that I could no longer see the cloves which I was meant to take out once the milk had cooled a little, and it also meant that the fruit became very squidgy, making kneading the resulting dough rather a messy affair!

Anyway, I think I managed to locate and remove all the cloves - after a traumatic childhood incident where I bit into a whole clove which was lurking in my bread-sauce I have a horror of doing the same thing again. Well, I put 3 in and after much searching got 2 and a half out, so there'll be a certain Russian Roulette element to eating the finished buns... 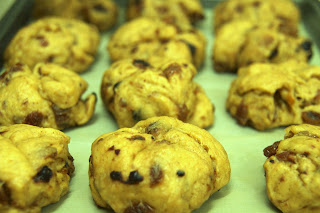 I used to think I was very bad at making bread products, I felt that yeast and I just didn't get on, but since moving to Brunei I now feel myself to be quite the expert!  I'd love to claim that it was my superior culinary skills, but sadly that would be wrong.  It's just that it's really warm here, perfect for proving bread. Unfortunately, as the dough had its second rise, my previously round buns splurged out into weird shapes.  I didn't think there was much point trying to force them back into the correct shape so just drizzled the crosses on as best I could and chucked them into the oven. 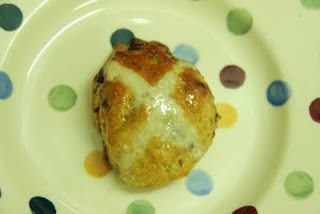 When cooked they had a quick sugary glaze which I hope goes a little way to disguising the fact that the bun pictured above was the only vaguely circular one of the 12... 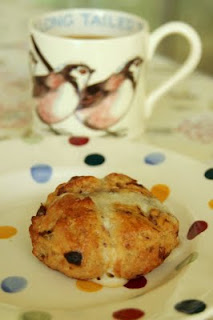 Today, Easter Eve morning, I enjoyed a Hot Cross Bun with a hot strong coffee.  The bun was warmed in the oven and slathered with salted butter.  I'm really pleased with these - they taste amazing, full of spices and moist fruits.  They're heavier, more doughy than the buns you'd buy in a supermarket, but I think that's always the way with home-made breads.  I'm looking forward to trying them toasted as well. 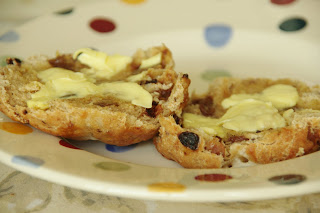 Well done Kate - they look great! The shape doesn't really matter - it's the taste that counts. Love the spices you've used; a recipe to try next year.
Happy Easter to you both. x

they look delicious Kate ! Shop bought buns have become a bit mediocre it seems (proved too fast and not enough fruit!). M&S deluxe buns are the exception and they even do hot cross bun fruit loaf - available outside of Easter, yummmm.