Considering that tourism isn't a big thing in Myanmar (yet) I was surprised to see lots of restaurants, particularly around Inle Lake, advertising pasta and pizza, clearly in an attempt to appeal to visiting Westerners.  Now I didn't go to Myanmar to eat Italian food, but after nearly 2 weeks there I was almost beginning to see the appeal...  as most Myanmar food seems to consist either of curry or salad.

Salad?  Don't pre-judge, these salads were some of the most amazing foods I've ever eaten...  but that's for my next blog-post!

When you hear the word 'curry' you probably immediately think of spices, and heat...  but the curries in Myanmar don't really fit this description.  They're more tomatoey (tomatoes are grown a lot in Myanmar, notably in the floating gardens on Inle Lake) and, whilst I think they are subtly seasoned with spices, they lack any chili heat. 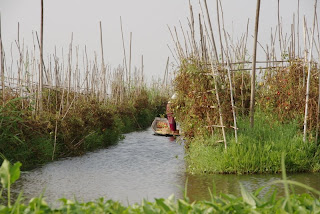 Harvesting tomatoes by canoe on Inle Lake (shot taken about a second too late, but never mind!)
We ordered curries several time and in various restaurants.  They always had the same sauce, and we always had to ask for extra chili!

I'm aware that this is a bit of a luke-warm write-up, but don't get me wrong, I liked them.  They were tasty and often made with interesting alternatives to meat, but they were just all a bit same-y. 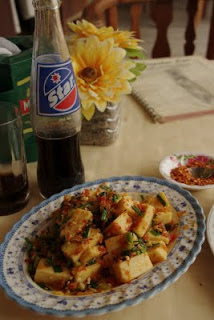 Here's my tofu curry.  Now there's a sentence I never thought I'd say!  I didn't intentionally go vegetarian on this holiday, I just ended up eating lots of vegetarian food - partly because we found 2 excellent veggie restaurants whilst in Bagan, but partly because there was a lot of nice vegetarian food available.  The tofu here was local to Inle Lake and was made with yellow split peas, giving it an unusual texture more akin to polenta.  You can see the little dish of dried chili in the background. 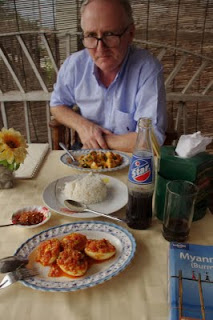 Here's Rob the following day, eating the same dish while I sampled Egg Curry (same sauce, different protein!).  He's not looking that impressed is he, but to be fair he was on the road to recovery after a nasty bout of D&V (hence me eating alone the previous day) and was still a bit nervous about eating anything at all.

I can't find any kind of 'Burmese Curry' recipe that looks anything like the curries we ate, but I suspect it's something that could be relatively easily recreated at home.  I think I'd make a paste of garlic, ginger and turmeric, and fry it with some diced onion before adding diced tomatoes and dried chillies.  A lovely addition to many of these curries was chopped spring onion, added just before serving.  Much as I enjoyed the tofu curry, and the hard-boiled-egg option, my favourite variation on the theme was pumpkin - cubes of pumpkin or squash simmered in the sauce until meltingly tender.

that tofu sounds really interesting. My fave though, would be the kind prepared with milk - it simply melts in the mouth. I kinda like curries with lots of heat, never had a 'not hot' one before, it sounds strange!
are you still in Myanmar?

Hey Kate, I came across Burma in a French book with a recipe for chicken curry, perhaps the secret ingredient is the fish sauce?
http://cookbookaddict.blogspot.com/2009/10/poulet-birman.html

and also in Orchards in the Oasis, where there are a few other Burmese recipes. Now I want to go!

The tofu curry sounds interesting - have never tried tofu. I like hot curry so would also be asking for extra chili!