Hari Raya Part 2 - A Trip to the Palace

It's not every day you get to meet your country's royalty...  but if you're Bruneian you can do it at least once a year!  Every year at Hari Raya Aidilfitri the Sultan of Brunei generously opens his palace to the public for 3 days for a 'meet and greet'.  Rob went yesterday along with the rest of the Bruneian Armed Forces, so I went along this morning with several friends from school.  What a great experience - although definitely one to do with a group, as there was a lot of waiting around.

Not only do you get to shake hands with the royal family,  but you also get a free meal!  The Bruneians love their macam - food - and this was clearly in evidence as we arrived at the palace and immediately joined the queue scrummage for the buffet. 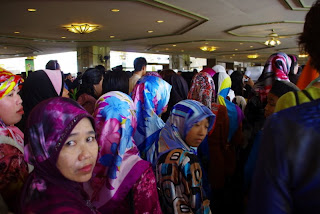 We soon discovered that most Bruneians are not schooled in the British art of queuing...  it was elbows out, and every man/woman for themselves!

The first excitement was the gold-trimmed crockery: 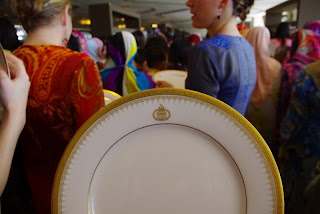 Smart!  There were then about 8 different food counters where you could get rice and all manner of different curries. 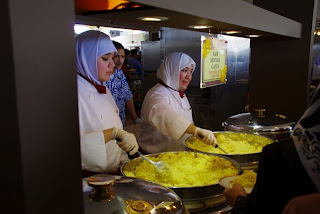 I managed to fight my way through to several of them and ended up with a plateful of delicious food - buttered rice with cashews, a spicy beef curry, a more mellow lamb curry and prawns with lemongrass. 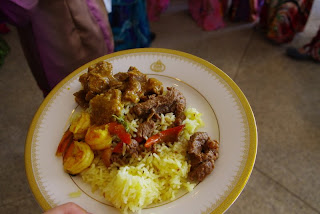 It felt slightly surreal to be eating this for breakfast at 8:30am, but we had got up early to get to the palace in good time so we were certainly hungry enough to do it justice!

The Bruneians in general have a very sweet tooth so of course there were plenty of sweets at the 'Cakes and Cookies' counter. 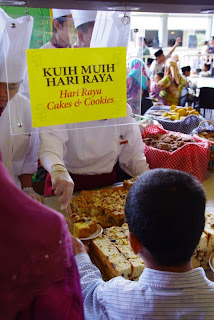 I opted for a fabulous bread and butter pudding with cherries (my photo of it was very poor so I won't post it - but trust me, it was delicious!)  I was initially tempted by the vivid yellow jelly until I inspected it a little more closely... 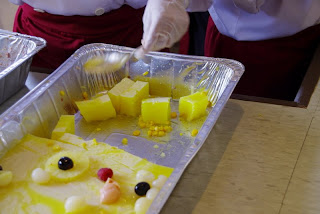 Yes, that's pineapple, grapes and raspberries on the top... and sweetcorn on the bottom!!  Not for me thanks! 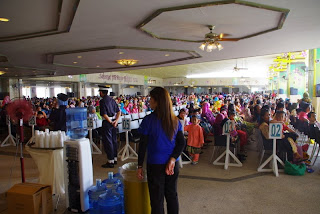 We moved on after the meal to a vast waiting hall where we were all seated in numbered rows.  We sat here for well over an hour, quietly digesting our breakfast and waiting to be called forward.  It was beginning to get a little dull, but everyone around us was incredibly friendly.  A couple of people asked if they could take photos with us which was very flattering!  We also made friends with this little chap who was fascinated by my camera and desperate to see the photos I took of him. 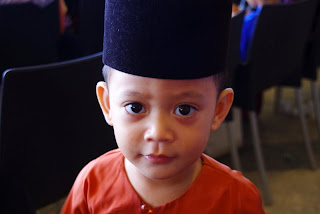 I loved his outfit, and hat (known as a songkok).

As soon as our row was called forward we leapt up in excitement... only to be lead to another queue, which lead us to another waiting room!  Luckily this one was air-conditioned and very ornate so it was a pleasure to sit here for a while. 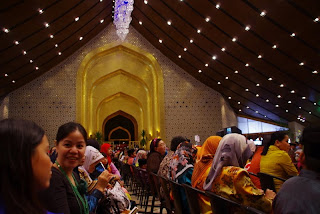 Again we were moved on to - you've guessed it - another queue! 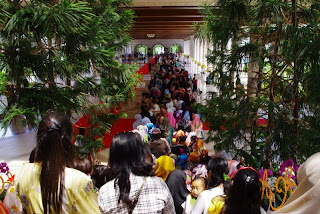 This could have been incredibly tedious, but I have to admit that I was really quite enjoying it.  We were able to chat, amongst ourselves and to the Bruneians around us (including one of the parents from our school and a couple of very smiley little girls!)  It was also fascinating to be inside the palace - so much to look at.

The Bruneians were all dressed up to the nines - it's traditional to have new clothes for Hari Raya - and really were a stunning sight en masse.  I loved this family in their matching bajus. 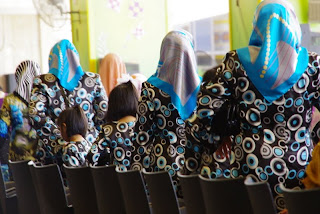 When we finally arrived in the same room as the royal ladies it was all over very quickly compared to the 4 hours we had spent waiting.  However the Sultan's wife was charming and asked us where we were from, and whether we were all teachers.  Clearly there wasn't time for much of a chat, but considering the poor woman was standing there for hours on end shaking hands with literally thousands of people, she was utterly gracious and elegant, smiling at all comers.  The princesses likewise were delightful - very glamorous.

As we left we all received a gift - appropriately enough it was a cake!  It was in an embossed yellow box which everyone carried proudly out of the palace. 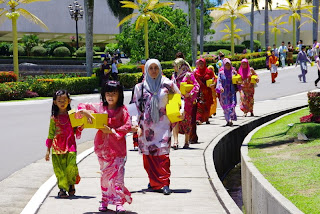 It really felt like quite an honour to attend and be part of this celebration.  I heard on the radio today that over 17,000 people had attended yesterday morning alone!  By my (very vague) estimation about a third of the entire population of Brunei visit the palace over the three days.  I think this tradition is unique to Brunei and a privilege to be part of while we're living here.

Our Hari Raya cards from the Sultan will certainly be taking pride of place in our living room! 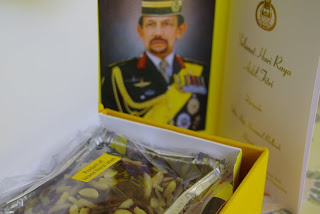 Wow,what a wonderful experience.
I feel honoured to have been allowed a glimpse into Bruneian life. Thank you. x

I have no idea how I stumbled on to your blog, but so glad that I did! Love becoming more familiar with this country/culture. Thank you!

It really was an amazing occasion. I'm constantly learning about Brunei and its culture - every day I seem to discover new things.

Jacqueline, lovely to 'meet' you! I'm always really touched when people comment on my blog. Glad you're enjoying it.