So we missed the big parade in town last Wednesday...   but I still got to celebrate!

Here are some shots from our National Day Assembly at school last Friday. 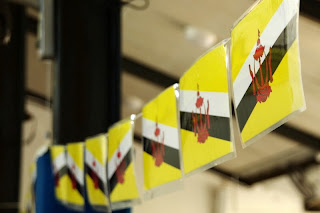 The school hall, decorated for the occasion. 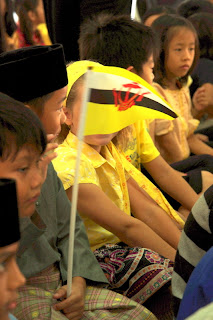 Waving the flag.  This photo makes me smile because the girl behind the flag saw me pointing the camera in her direction and gave me a beautiful grin... only for her neighbour's flag to flap right in front of her face!  (She and I had a good laugh about it in the classroom when we looked through the photos!) 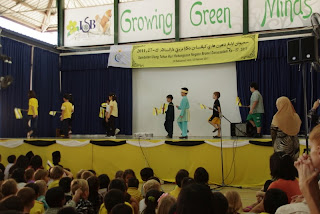 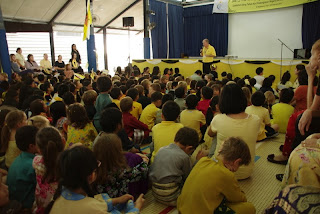 A hall full of people dressed in yellow! 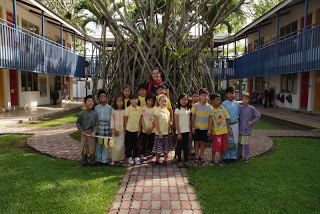 Me with my lovely class.
We were told to dress in yellow and black as they are the main colours on the national flag.  This proved rather a problem as I don't own a single item of yellow clothing (apart from one vest-top, but sleeveless = inappropriate here).  However, I went for black and red (there's a little bit of red on the flag!) and also wore a yellow Brunei baseball cap for the assembly.  Tragically there's no photographic evidence of me in said baseball cap...
On my way home I was waiting in traffic at the roundabout and snapped a couple of photos of the billboards that had been erected for National Day: 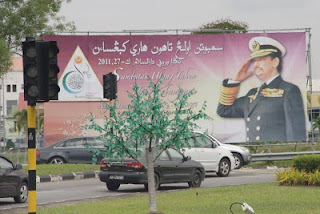 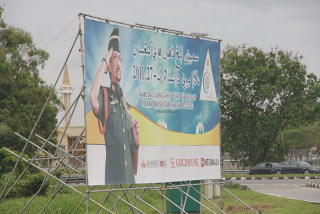 The Sultan certainly has an impressive range of uniforms - almost as many as Rob!
Posted by Norm at 10:35

Hi, it's a very nice blog you have here. It's even nicer learning that you are British and currently living in Brunei.

I am a Malaysian from Kuala Lumpur and I used to study in Ireland. I've been to UK for a few times and I really love it there.

I've been to Brunei twice because I've got some distant relatives from the country. So how do you find living there? More importantly, what brings you there? =)

I can see from your class size that you're a victim of an overcrowded classroom mate :-)

Hi budaksederhana! Nice of you to pop by. We're living in Brunei for 2 years because of my husband's job. I have also managed to get a job here, teaching in one of the International Schools. We're really enjoying the hot climate, great Asian food, and the opportunities to travel! We went to KL last October, on our way to Vietnam (we often go through KL on Air Asia flights!). We'll be going back to the UK sometime in 2012 - we love it there too, it'll always be 'home' to us even though we love travelling.

It must have been really fun travelling around. The fact that you are staying abroad with your family sounds exciting already. How did you first adapt with the new surrounding and culture? Was it hard?