We eat rice a lot.  Thai Jasmine rice by choice - known in Malay as Beri Wangi!  We often cook too much rice - usually accidentally, but we're now doing it more and more on purpose as we've discovered some great ways to use it up.  There's Nasi Goreng of course - fried rice - which barely needs any kind of recipe as it's such a good use-everything-up kind of dish.  Another similar dish is rice porridge.

In Asia rice porridge is a popular breakfast dish.   We ate in in our hotels in both Kuala Lumpur and Ho Chi Minh City.  When we're at home we eat it at any time of day - it's a great lunch, or light supper. 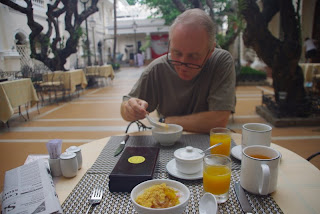 It's served plain, but with a variety of condiments.  Here in Vietnam (the picture above was taken in the Continental Hotel in Saigon) these were sliced pickled vegetables and chicken 'floss', that strangest of meat products!  However, you can really add whatever you like to it - as long as you include a generous slug of fish sauce, and a squeeze of fresh lime.

It's the simplest thing to make, and you only need a small portion of leftover rice. 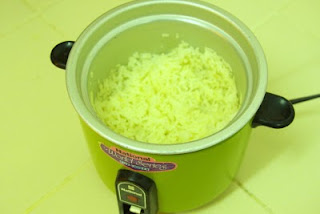 When your rice is cool, cover it with cold water and place it into the fridge overnight.  The rice grains will absorb the water and swell up. 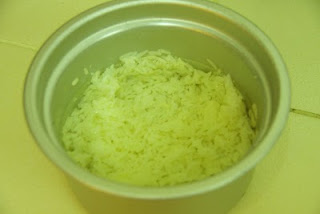 Drain off any excess water and scrape the rice into a saucepan along with some chicken stock.  We make stock every time we have a chicken so generally have a tub or two of it in the freezer, but have also used bottled stock concentrate here to good effect.

At this point it's nice to add some celery which flavours the soupy liquid.  Rob and I differ as to how we like this - I chop the celery very finely, while Rob - as you can see - throws large chunks of it in.  This offends my aesthetic sensibilities somewhat, both visually and culinarily (I prefer the porridge to be smooth not chunky), however I don't suppose you can complain too much when someone else is cooking! 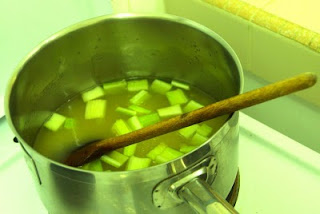 Simmer the rice and stock for a while.  I don't know how long, we tend to just leave it bubbling gently on the stove for up to an hour.  By this point the grains of rice will start to break down and it will begin to look more like porridge than soup. 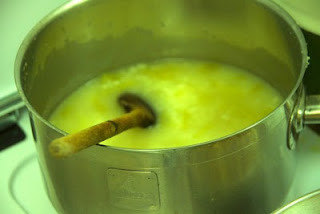 From now on it's up to you to add whatever you like.  An essential for me is nam pla, or fish sauce, but I'm aware that this is a love-it-or-hate-it kinda thing, so if you're in the 'hate' camp then go for regular light soy sauce. If you like some chili heat then finely chop a birdseye chili and mix it with the fish/soy sauce to sprinkle on the dish to taste.

I think a generous handful of chopped coriander is also important, either fresh or frozen (if frozen stir it through while the porridge is still on the heat).

My new favourite topping however is a tin of this... 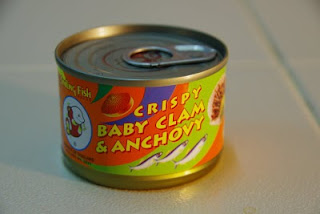 I'll take a punt on the fact that your reaction to this picture would have included the words "Yuk!" or "Gross!" but hear me out - they're delicious!  I noticed them in the supermarket soon after we arrived and had often picked them up and given the tin a shake.  Eventually the rattle of the tin got the better of me and I threw some into my basket.  I was fully prepared to hate them, but you know me, I'll try most things.  However, I love them - they're crispy, crunchy, salty with a slight sweetness (the clams especially) and strangely addictive. 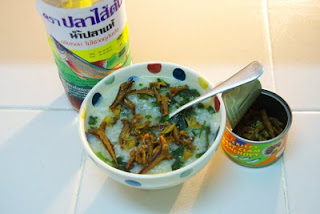 I find half a tin scattered over the rice porridge just perfect.
Posted by Norm at 09:16