Camping. Is there any other form of holiday that provokes such a range of reaction?

Many people would say that it is an idyllic break from one's hectic lifestyle; a chance to reconnect with nature, to renew your appreciation for The Great Outdoors. And what better way to do this than to sleep under the stars? We camp regularly on our holidays, both in the UK and abroad, and have had some wonderful times - a great campsite, perfect weather and good company and you have all the ingredients for a fantastic break. We have had a couple of large 'family camps' at a wonderful campsite in Dorset where we annex a corner of the field and set up 4 or 5 tents. From there we can do a lovely hike to the coast at Swanage and then hop on the steam train to take us back to the station near the campsite. The evenings are spent waving at the passing trains! 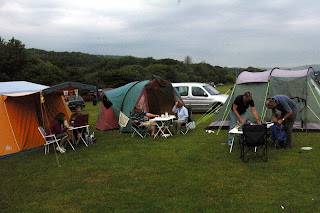 We have also had some lovely camping holidays in the Lake District... although the weather can often be a little more temperamental up there!
Since coming to Canada we have continued to camp on several of our trips. We haven't quite made it to the Winnebago stage, but have often camped, sans tent, by sleeping in the back of our large car. 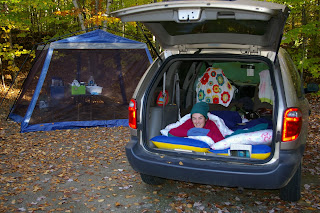 However, it has been when we've been under canvas that we have had some of our best camping experiences here in North America. We had some classic camps whilst in the west of Canada, particularly in the Rockies, last Summer. We camped at two ranches, one of which was hosting their annual Indian Pow-Wow that night (good timing..!), whilst at the other ranch we ate buffalo-burgers at the restaurant... overlooking the herd of buffalo! One campsite, right on the Icefields Parkway, was directly opposite the Athabasca Glacier - an incredible view. 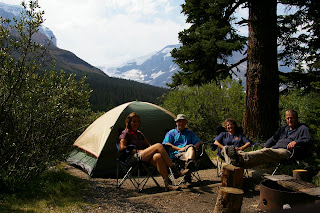 Of course, camping in such exciting places often has an added element of excitement because of the local wildlife... we have often heard the eerie howling of coyotes through the night, and there is a certain visceral thrill to be had when locking all of one's food into the bearproof lockers provided at many campsites. 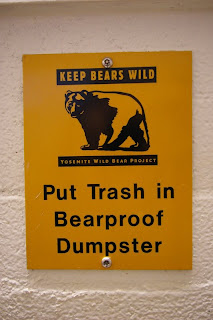 Here in Ontario we have canoe-camped in Algonquin Park... paddling 4 of us (plus all of our equipment) out to a lakeside pitch where we were treated to an amazing sunset, a chance for some moonlit canoeing and then a beautiful misty sunrise the following morning. 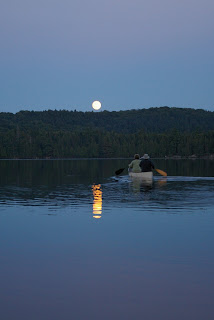 One of my favourite memories from our recent trip to California was waking up at 4am to look out of the tent and see a sky more full of dazzling stars than I have ever seen in my life.
Yes, sometimes camping can be so good that you almost forget that it's a real 'budget' option for a holiday! There are certainly times when I would rather be in a tent than a hotel - although don't get me wrong, we camp in style, with airbeds, sleeping bags, etc. No backpacking for us!
But... I have recently come to realise that being a good camper is an art - and an art that is sadly dying. Camping requires a degree of consideration for others that far too many people just don't seem to possess...
Remember that campsite on the Icefields Parkway? Sadly my strongest memories of that camp are not the thrill of awakening to the sight of a majestic glacier across the valley, but of the minibus-load of youths who set up camp in the site next to ours and proceeded to spend most of the night singing and playing the recorder (badly). We politely asked them to be quiet at around midnight, and then Rob TOLD them to be quiet at 3am, insisting that they poured water onto their campfire. A small victory was achieved the following morning when we found their recorder lying unattended... I wonder if they ever found it in those bushes?!
History seemed to be repeating itself on our latest trip. We had settled into a peaceful beachside site in California and were relaxing in the evening sun, when up roared a car-load of yobs who proceeded to leap out of their car and climb trees, shouting like idiots as they did so. They then disappeared into the woods to hack at the trees for firewood. Having set up camp, I saw one of them get back into the car and start the engine. Thank heavens, I thought naively, they might be leaving... but no, he was turning the car around so that the car speakers would be directed towards them when they put their gangsta-rap CD on at full volume. It was at this point that I yelled "OI! Turn that off!!!"... They turned it down, slightly, but continued their noisy partying on into the night.
I always feel caught in a real dilemma in this situation. The self-rightous, teacher-like side of me just wants to march up and tear a strip off them for being so obnoxious, but the cautious side of me realises that there is a very real danger of causing an argument... and you feel pretty vulnerable in a tent in the dark. I wasn't sure that a 'stern word' from me would do the trick on this occasion..! So we moved our tent. Some of our fellow campers also chose the path of least resistance - I noticed a nearby camper-van driving to a quieter part of the campsite during the night.
Later in the trip we once again ended up next to a group of people playing their car stereo well into the evening. It was a very crowded campsite so moving was not an option, so we bit the bullet and asked them if they could turn the music off. Although they seemed slightly peeved by the request, they did so straight away and were quiet for the rest of the night. But I couldn't help noticing that no apology was forthcoming...
No, camping is rarely as relaxing as it could be. The incidents mentioned above were the worst of the lot, but we suffered many others on our California trip, from the continuous thrumming of RV generators (getting back to nature - but with a flat-screen TV to watch when nature just gets too uncomfortable) to the irritation of young children speeding around the campsite on ATVs (clearly illegal, so their parents obviously waited until it was dark to let them do it!).
I'm aware that this post may sound very po-faced. Believe it or not, I have no problem with people having fun! However, it seems that having fun and having consideration for other people are now mutually exclusive. We have had many beery nights round the campfire, with plenty of laughter, but we always head to bed at a reasonable time (occasionally tripping over guyropes as we go... I say 'we' but John knows who I mean!) and I like to hope that we didn't cause a disturbance to too many of our fellow campers.
I'm sure that we will 'Carry on Camping' for several years to come, but will just have to remember to pack the earplugs as well as the wine!
Posted by Norm at 21:42

Camping is my idea of holiday hell, but your trip does sound great Norm.