We've been back for a week and a half now, and it's taken me that long to it down and write this post.  There have been the practical issues of sorting through about 1000 photos, and putting many loads of clothes through the washing machine - oh yes, and starting a new term at school - but it's also been a time to mentally assess the trip.  I say trip as opposed to holiday as this really wasn't your usual relaxing break.  It was quite frankly exhausting, sometimes gruelling.  However, there were also many high points, and many amazing sights that I am thrilled to have seen.

I've pondered writing several posts on different aspects of the trip, but I've gone instead for an A-Z, which will hopefully cover it all!  Here goes...

A is for Agra

More specifically its most famous building, the Taj Mahal.  The rest of Agra was pretty grim!

This was one of those rare places that actually lives up to its reputation.  I was expecting to be a bit disappointed by it as it's such a well-known sight, but the opposite was true, I was bowled over by it.  It was vast, majestic, beautiful and awe-inspiring. 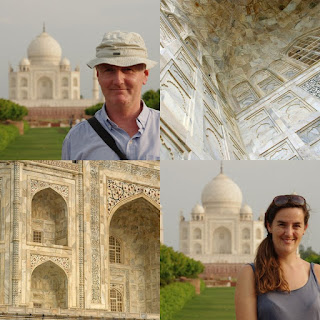 The Taj Mahal is closed to non-Muslims on Friday, which was the day that we arrived in Agra, but our driver took us to the gardens opposite the Taj, just across the river.   There were very few other people there but we had the most stunning sunset views.  The next morning we set off early to visit the Taj itself, and even at 7.30am it was busy - but due to the sheer size of the place it never felt crowded.  In fact all the people there just seemed rather tiny and insignificant.  After marvelling at the building however, it was lovely to focus on the other visitors, particularly the ladies in their colourful saris. 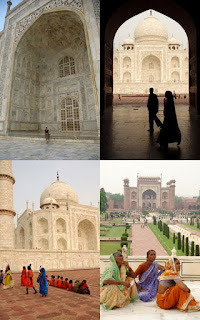 A is also for Amber Fort.

B is for Baksheesh.

Although India is a 'cheap' destination by Western standards, you could be forgiven for thinking that you have a hole in your wallet as you travel around as almost everything you do seems to require 'baksheesh' in the form of a tip.  I don't object to tipping after a meal - I'm perfectly used to that in the UK and Canada/USA - and I'll happily tip someone for carrying my bags to my hotel room (although quite frankly I'd often rather just do it myself), but I do object to giving someone a tip simply for handing me a paper towel at the bathroom sink when I've been to the toilet and washed my hands!  This happened in almost every restaurant we ate at.  It wasn't so bad for me (as these 'assistants' were always male and therefore less intrusive in the women's toilets), but poor Rob had people scurrying around practically following him into toilet cubicles in the desperate desire to earn a tip, turning on the tap for him at the sink, and even dispensing soap for him!  It really did get very irritating.

B is also for blue - specifically Jodhpur, the 'Blue City'. 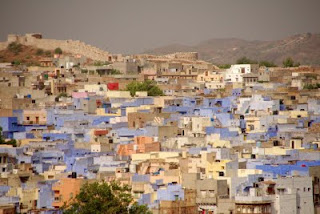 C is for Curry.

We ate some great food in India... but I have to admit that it did become slightly monotonous.  Perhaps it was just that we were mainly offered Rajasthani food, but pretty much every menu began to look alike after a while.  Don't get me wrong, it was all lovely stuff, but 2 weeks of curry became a bit much.

I was however hugely impressed by the vegetarian food on offer.  I'm not vegetarian, but decided to eschew meat for the duration of the trip in an attempt to stave off Delhi-Belly.  I ate lots of wonderful dishes that used Paneer, the gorgeous mild white curd cheese, and we had plenty of dhal, many different types.  Unfortunately I don't think it was very healthy.  All the dishes were swimming in ghee, and we avoided all salad in case of illness. 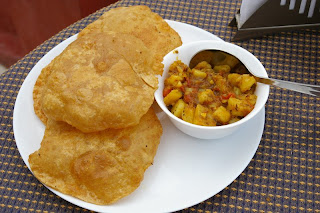 Poori bhaji and parathas with curd (yoghurt) and lime pickle. 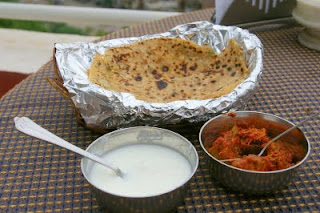 I'm looking forward to making some curries soon, but might be leaving it a little while!

C is also for chai (the spiced tea we drank at least 3 times a day), colours, cows and camels (regular features of the traffic in India). 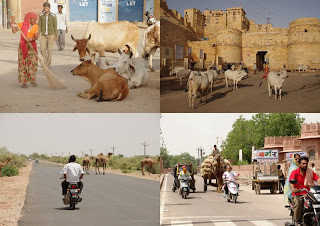 D is for Delhi

Delhi is most people's introduction to India, and I have to say it's not a great one.   Vast and crowded, with nightmare traffic, it's a city I found hard to love, not helped by the fact that we were put in very seedy hotels there (we stayed there for our first 2 nights, and then the final night of our trip).  However, we did have an excellent guide for our full day in Delhi, and saw some wonderful sights.

Our favourite thing was wandering around the narrow streets in Old Delhi, just watching people going about their business. 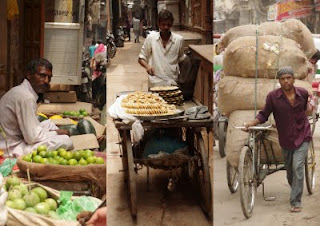 It was chaotic and hot, but full of life and colour - and lots of smiling faces (the children in particular always waved and shouted hello). 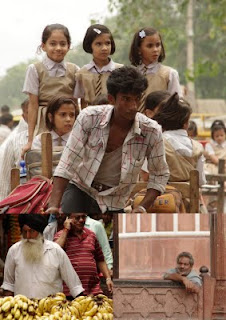 D is also for driver - the lovely Ram, a Nepalese chap who drove us throughout our 2-week trip (see photo below) - and desert - the Thar Desert in Western Rajasthan. 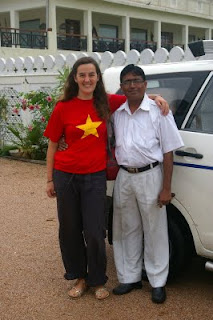 E is for Elephants.

As mentioned previously (see letter C) animals are an integral part of Indian traffic.  Cows are sacred and seem to know it, wandering round with the clear belief that they are invincible.  They certainly lack any road-sense.  Camels are beasts of burden, and could often be spotted pulling carts laden down with bricks or stone.  But elephants?  I wasn't expecting that!  We passed a few being used to pull carts, but sadly I didn't manage to get a photo as we were being driven at the time.  However, we did see a huge number of elephants at Amber Fort, just outside Jaipur.  They were being used to carry tourists up to the fort - what a way to arrive.  We didn't take the elephant ride option (been there, done that!) but did take the opportunity to take some photos. 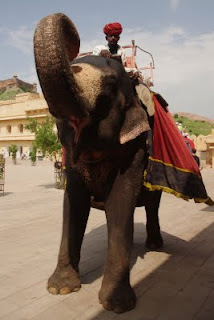 Shortly after I took this photo the mahout demanded 'baksheesh' (see letter B) for the privilege...

We saw the elephants again as we drove back into Jaipur from Amber.  The road was steep and winding, but the mahouts were 'driving' their elephants down the road at a very leisurely pace, causing miles of tailbacks!

Looking forward to part 2!
Kate you are truly blessed to have seen such a lot of this amazing world of ours.
And we are blessed that you share it with us.
Thank you.
X

Hi, I am just one of your blog readers (for a while now!). I do love travelling and try to go as much as we can but India never seems to be on our agenda. I've heard so much about gruesome details so not sure if we want to go. But I look forward to reading part two to know more about the country and all its glory. Thank you for sharing.

Thanks Anna, I know I'm very fortunate to have these opportunities - but you know I love to share!

Isma, thanks so much! I never quite know who's reading my blog, but lovely to see a fellow Brunei-resident doing so. We are loving our time here in Brunei, not least the amazing opportunities for travel in Asia. To be honest, I don't think I'll ever go back to India... it is pretty grim in many ways, the poverty is appalling in so many places. However, I'm glad I've been there and seen the place, and there are lots of incredible sights.